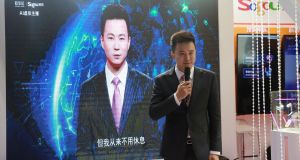 Xinhua news anchor Qiu Hao next to an AI virtual news anchor based on him. Photograph: Xiaoying/Qianlong.com

Robot news anchors are a thing now, or at least they are in China, where they have the obvious advantage to the authorities of being less likely – bar some rogue programming – to veer from the propagandist script.

The two new robot news anchors, developed by Chinese state news agency Xinhua and technology company Sogou, have been based on real-life Chinese newsreaders, Qiu Hao and Zhang Zhou, with the latter’s digital counterpart programmed to speak English. “I will work tirelessly to keep you informed as texts will be typed into my system uninterrupted,” he warns.

Xinhua’s latest hires are not so much androids hankering after a media career as they are virtual puppets bestowed with artificial intelligence (AI). Capable of mimicking human voices, facial expressions and mannerisms while reading aloud news reports in a somewhat stilted fashion, they are destined to become the agency’s online workhorses.

Television news presenters – anchor is an old-fashioned term – probably don’t need to start preparing their early retirement plans en masse just yet. And when they do, it won’t be because of AI’s creepy advances.

Faced with the preference of younger news consumers for social media sources of breaking-news nourishment, television news in both bulletin and rolling channel form is doing everything it can to market itself. But despite daily flashpoints of criticism of everything from running orders to interviewee choices to presenters’ clothing, television still emerges as one of the most trusted mediums for news.

The Reuters Institute for the Study of Journalism’s 2018 study found that RTÉ News and BBC News had the joint highest “brand trust score” among Irish news consumers, while Sky News scored highly on “weekly usage”, suggesting it was getting something right. In the equivalent UK survey, BBC News, ITV News and Channel 4 News all polled comfortably higher on trust than print and online titles.

This shouldn’t be surprising, especially as far as the UK is concerned: broadcasters are required by their regulators to be politically impartial, but there is no such statutory obligation on print and online titles, and in Britain the press has long been nakedly partisan.

Sometimes, in their more obnoxious moments, it’s possible to conceive of British rolling news channels as a diluted version of the polarised US kind, but in truth they are not the same beast at all. Their editorial lines are much less organised and much harder to pinpoint, and therefore less consistently incensing to those who disagree with them. When a facet of television news coverage is fiercely contested – as the BBC’s approach to Brexit has been of late – it is in part a reflection of how much prestige the medium retains.

As the rather exposed (but usually well-paid) conduit between their bosses and their audience, news presenters have a unique role. How human should they aspire to be on air? Over the decades, the trend has been for a more relaxed, less formal vibe. Early television newsreaders were coldly authoritative (and mostly male). Well into the 1990s, they remained wedded to that stiff, glacial mode of delivery, so much so that Kirsty Young was able to generate her own headlines in 1997 merely by perching on her Channel 5 news desk rather than sitting behind it.

Now, of course, news presenters are required to wander all over the place in complicated studio and outside-broadcast choreography and they do far more than simply read the news. They are the presenter, interviewer, ringmaster, improviser and eyebrow-raiser.

And they can leaven the cycle with dry humour. The BBC News Channel’s Simon McCoy is notorious for going viral for well-timed outbreaks of sarcasm or merciless punning, and while much welcomed, it’s a high-stakes move: the real art lies in his flick-of-a-switch returns to seriousness and gravity when the next news item demands it.

In the age of AI newsreaders, it makes sense for carbon-based life-forms to double down on their humanity, assuming they have some.

Alas, control of the expression of emotion is not an equitably distributed talent, as US viewers of new weekly news show Axios on HBO recently discovered. On the debut episode of this Washington DC-newsletter turned television show, journalist Jonathan Swan appeared positively gleeful as Donald Trump (an avid viewer of television news) declared he would eliminate birthright citizenship (a power he does not have). “Tell me more!” says an excited Swan.

After his performance was panned, Swan told colleagues in leaked messages that as a print reporter he was “not used” to having his facial expressions recorded. “What you saw on tape was my authentic surprise because the president confirmed a piece of reporting in the moment. My brain popped.”