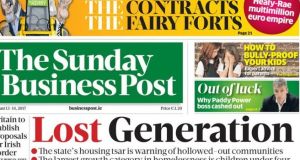 The Sunday Business Post has confirmed that Emmet Oliver is to become its interim editor with Susan Mitchell as deputy editor.

The appointment of Mr Oliver, a former head of communications for IDA Ireland, marks his return to journalism after almost seven years.

Prior to leaving the profession he was deputy business editor at the Irish Independent, while he was also business editor of the Sunday Tribune. He began his career at The Irish Times.

Mr Oliver left journalism to join IDA Ireland in 2012 before leaving to work for US multinational BioMarin Pharmaceutical and then the Irish League of Credit Unions. In recent months, he has been lecturing at Dublin City University.

Ms Mitchell, who recently won the award for news analysis at the Newsbrands Ireland Journalism Awards 2018, currently serves as health editor of the Sunday Business Post.

It indicated that a permanent editor would be appointed in 2019.

Mr Lyons, the paper’s former deputy editor, stepped up as executive editor after previous editor Ian Kehoe decided to leave during the summer shortly before Kilcullen concluded a deal to buy the Post from Key Capital.

“We’re delighted that Emmet and Susan are taking up these positions. These appointments reflect our commitment to excellence in journalism and help strengthen and develop our top-class team. They will play a key role in developing the Sunday Business Post offering in the weeks and months ahead,” said chief executive Siobhan Lennon.

The title has a combined print and digital circulation of 31,332, according to the most recent published figures from the Audit Bureau of Circulations (ABC), which are for the first half of 2018.

Its digital ePaper sale of 2,631 more than doubled in this period compared with the first half of 2017, while its print sale of 28,701 was down about 5 per cent year on year.

1 Who are Ireland’s 17 billionaires?
2 My father in a nursing home wants to gift me his house
3 Are there annual limits on inheritances or gifts to a child?
4 State subsidises public sector retirees to cover gap until State pension
5 Northern Ireland drops campaign for lower corporation tax rate
6 GoMo is being investigated by advertising authority
7 Ireland ranked second in Europe for data breach notifications
8 Aunt has bequeathed a house intended for my son to me
9 Richer countries must do more to tackle climate change, Thunberg tells Davos
10 Dublin shopping centre bags €61,000 in annual energy savings
Real news has value SUBSCRIBE