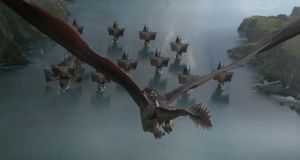 Daenerys (Emilia Clarke) rides Drogon towards Euron Greyjoy’s fleet in season eight of Game of Thrones. The animator who headed the team that created the dragons is coming to Dublin for a free animation masterclass.

Learning how to use the software needed to create characters like the dragons in Game of Thrones is harder than learning how to fly a plane, one of the hit show’s lead 3D animators has said. But that shouldn’t put off those wanting to work in visual effects from seeking a career in the sector, he added.

Speaking ahead of a visit to Dublin and as Game of Thrones comes to a bloody end after eight seasons, Jonathan Symmonds, who led the CGI-generated animations that made the three dragons – Drogon, Viserion, and Rhaegal – come alive, said 3D animation is an industry that anyone with passion can work in.

“3D animation has played a vital role in the success of the show. Even though Game of Thrones is based in a fantasy environment, that doesn’t mean that animation shouldn’t be of the highest quality because the moment that something is rendered that doesn’t look realistic enough, viewers pull away,” he said.

“Doing something like creating the dragons was difficult because there are, of course, no natural references for them. In the early stages when they were small we used bats and owls as guides but as they got bigger we turned to birds with bigger wingspans and then also horses and crocodiles for the face,” Mr Symmonds added.

The specialist, who has also worked on big-budget films such as Avatar, Troll Hunter and Where the Wild Things Are, is coming to Talent Garden in Dublin next month where he will giving a free talk on “Creating the Dragons of Game of Thrones”. The visual effects specialist will share his secrets into the production, creation and animation of the dragons with attendees invited to learn about the process of creating multilayered interactive models.

He will also give a data visualisation masterclass on how to interpret and uncover new insights from data quicker, more creatively and with greater impact.

Mr Symmonds, who was previously lead animator at Pixomondo, a Frankfurt-headquartered visual effects company that has worked on big-budget productions such as The Hunger Games and Sleepy Hollow, is also joining Dr Finn Macleod for two masterclasses where he will illustrate how to take data visualisation to the next level using movement, 3D, light and texture effects.

End of the show

Speaking of his time on Game of Thrones, the last episode of which aired overnight (9pm US east coast time) and airs in Ireland on Monday night, the animator said those working on the show had to develop bespoke software tools to illustrate computer-generated animals such as the dragons, direwolves and krakens.

“A lot of innovative solutions had to be found so that we could have Drogon in the frame along with Daenerys in a manner in which they blended together and a lot of this focused on the lighting and the merging of the back plate,” said Mr Symmonds.

“We always had it as a rule that Daenerys should never be overshadowed by Drogon despite how big and impressive he obviously was. It was important that the focus should always be primarily on her as she was the queen,” he added.

The animator, who now runs his own company called Sophoria, is also a trained pilot. He said that getting to grips with the technology used to create computer-generated animated characters in films and television shows is more daunting that being in the cockpit.

Nonetheless, he stressed that budding animators can learn the trade without having to resort to expensive and time-consuming courses.

“Learn as much as possible from things like YouTube tutorials, make yourself as valuable as you can wherever you go to work, and don’t start off working for the biggest studios. If you do, you could find yourself working on just one movie for a long time whereas you’ll gain a lot more experience if you work for a smaller production company on multiple projects,” said Mr Symmonds.

The Talent Garden workshops will be held on June 20th and 21st. For more information visit talentgarden.org/ie/innovation-school.