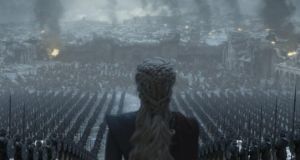 To say the reception to the final season of Game of Thrones has been a mixed bag would be an understatement. Spend any time on social media on Sunday nights or Monday mornings, and the onslaught of complaints about the direction the beloved HBO series has taken of late are unavoidable. A new petition has taken that backlash to another level. It calls for a do-over of the entire season.

“Remake Game of Thrones season eight with competent writers” demands a petition posted to Change.org, following this past weekend’s episode, The Bells, one of the series’ most polarizing episodes to date. The petition has since been signed by more than 750,000 disgruntled fans.

“David Benioff and DB Weiss have proven themselves to be woefully incompetent writers when they have no source material (ie the books) to fall back on,” the petition reads. “This series deserves a final season that makes sense. Subvert my expectations and make it happen, HBO!”

Among the reasons for signing, many of the signatories have echoed common complaints about the season: it has been rushed, plot twists haven’t been adequately set up and character motivations seem unfaithful.

One donor wrote that the last two seasons of Game of Thrones “were rushed to the extreme detriment of the show” and that while the production has been impressive, the writing has “ruined the best show to ever air on TV”.

“We watched it for more than eight years and in the end that’s what we get. Are you serious?” added another.

“I don’t want these two anywhere near Star Wars, either. This was abysmal,” wrote a third, referencing showrunners Benioff and Weiss’ next project, helming an upcoming film in another beloved fantasy franchise.

The Star Wars films are no stranger to similar petitionsfrom unsatisfied fans. Following a recent installment, a petition was struck up to remove Star Wars: Episode VIII – The Last Jedi from the official canon, pulling in 116,945 supporters.

Much like those efforts, the Game of Thrones petition is highly unlikely to achieve its intended goal. Considering about 18 million people watched the most recent episode, a few hundred thousand angry fans are a mere drop in the bucket. – Guardian

Mary Trump on her Uncle Donald: ‘He’s acting on his own racism’
5 Convert with a lot of convincing yet to do
6