Manchester United looks to up its game after ‘turbulent season’ 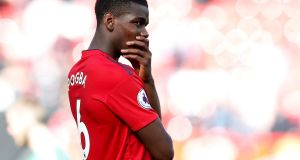 Manchester United’s executive vice-chairman Ed Woodward has pledged a return to winning ways following a “turbulent season” for the Premier League team despite revenues continuing to improve off the pitch.

On Thursday, reporting third-quarter results covering three months to March 31st, 2019, the club said revenues were £152.1 million (€174.2m), an increase of 3.4 per cent compared to the same period last year. Pretax profits also rose to £11.1 million, up from £8.3 million from a year earlier.

The increases are mainly due to increased broadcasting revenue received for the team’s extended run in the Champions League, where it reached the quarter-finals.

However United finished this season in a disappointing sixth place in the Premier League, outside the qualification places for next season’s Champions League competition.

The failure is likely to hit revenues next season as the club will miss out on the more than €2 billion that will be distributed among participating clubs. Instead, the team will play in the Europa League, a lesser continental tournament in which only €510 million is shared between teams. – Copyright The Financial Times Limited 2019