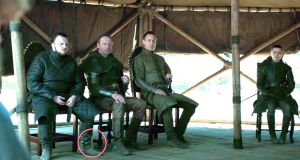 The offending scene with the water bottle. Photograph: @JonxDanyy 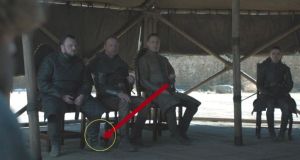 First it was a rogue coffee cup. Now, Game of Thrones fans have spotted another present-day item lurking onscreen in the fantasy drama: a water bottle.

The erroneous object was detected by particularly perceptive fans during a scene from the show’s final ever episode, tucked behind the boot of character Samwell Tarly during a tense diplomatic scene.

Its uninvited guest appearance comes just two weeks on from another headline-making gaffe, in which a takeaway coffee cup was perched next to Daenerys Targaryen during a banqueting feast at Winterfell in season eight episode four.

a water bottle in King’s Landing!! #got #gameofthrones pic.twitter.com/mwGQlsLwnh

That error prompted a deluge of memes on social media, as well as a mock apology from the show’s broadcaster HBO, who said in a statement that “The latte that appeared in the episode was a mistake. Daenerys had ordered an herbal tea.”

HBO eventually edited out the coffee cup for later broadcasts and streaming versions of the episode. It is not know if the network will do the same for this latest mistake.

Coming so soon after that caffeine-based error, the misplaced water bottle is likely to cause much embarrassment for a show that has already received plenty of criticism in its final season, with hundreds of thousands of fans signing a petition calling for its last six episodes to be remade.

The finale is expected to break ratings records for HBO, with millions more watching around the world. – Guardian