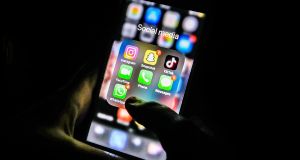 TikTok is used daily by more than 90,000 Irish people over the age of 15, according to a new study by Ipsos MRBI.

The research firm found that some 6 per cent of the population own a TikTok account, up from just 2 per cent six months ago, with 43 per cent of this group using the short-form mobile video app daily.

The share of account owners that use TikTok daily has shot up 10 percentage points over the past six months, Ipsos MRBI found.

TikTok, which is owned by Beijing-based ByteDance, only launched outside China in 2017.

Since then it has fast become popular with young people who make and share 15-60 second videos on the platform, with the app estimated to have been downloaded globally more than 1.5 billion times.

Ipsos MRBI’s figures are based on a telephone survey of 1,000 adults aged 15 or more. TikTok is likely to have additional users under this age, however.

Some 43 per cent of people have an Instagram account, with the Facebook-owned app again attracting a 64 per cent daily usage rate.

LinkedIn account ownership rose 5 percentage points to 35 per cent, although only 15 per cent use it daily, which was down slightly.

WhatsApp, which is also owned by Facebook, remains the most common social messaging app, with 79 per cent of people owning an account and three-quarters of this group – or some 2.2 million people – using it daily.

However, Snapchat lost some ground, with 29 per cent of people owning accounts and about six in 10 of them using it daily.

While some 6 per cent of Irish people have a Tinder account, up 1 percentage point, only 8 per cent said they used it daily.