Irish TV stands to benefit - and suffer - in Election 2020

RTÉ will be keeping a tally of its costs, while Virgin Media won't want to displace Love Island 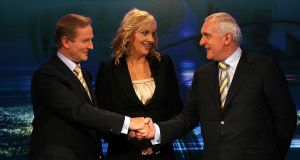 The last televised head-to-head debate between a taoiseach and the leader of the opposition was between Bertie Ahern and Enda Kenny in 2007, with RTÉ’s Miriam O’Callaghan chairing. File photograph: Julien Behal/PA Wire

“Any top tips for the election?” I ask a colleague. “Take the month off,” he says, which is obviously the best advice I’ve ever received first thing on a Monday morning. You can be invested in the outcome of a general election while, at the same time, anticipate the process of getting from the current “speculation is intensifying” stage to the post-victory shoulder-sitting one with all the enthusiasm of Bill Murray on Groundhog Day.

The date for Groundhog Day, which everybody forgets is a film about working in the media, is not a secret. It’s February 2nd, as the day is much better known here. The date of the election is unconfirmed at the time of writing. Leo Varadkar has been keeping those of us who aren’t directly involved on whatever the opposite of tenterhooks are until his team runs the software that algorithmically selects the optimum date for electoral success – at least, I think that’s what is happening. I’m not a political journalist.

Political journalists are either genuinely excited by the prospect of an election or they’re doing a great job of faking it. At last Thursday’s spring schedule promotion event for Virgin Media Television (which is now kindly abbreviating itself as VMTV), its news and current affairs faces declared themselves ready for the “full tilt” madness.

And that was just the two men beside her, VMTV’s Tonight Show hosts Ivan Yates and Matt Cooper.

“We’re going to have a winter election,” observed Yates, controversially ignoring Ireland’s extremely well-financed “spring starts on February 1st” lobby. This was welcome news in his book. “A May or June election, it’s [about] pumping the flesh, it’s long summer nights. A winter election is actually fought on television.”

That means more debates than you can shake a fist at.

If the 2018 Irish presidential election and the hat-trick of UK general elections from 2015 to 2019 have taught us anything, it’s that set designers for TV debates love nothing more than channelling quiz show Fifteen to One and positioning contestants – sorry, candidates – behind a curve of gleaming lecterns.

Sometimes, however, the TV choreographers lose the run of themselves and make choices that can shatter several campaigns at once. If you see a cursed bar stool anywhere near a television debate, for example, you can assume someone behind the scenes hates politicians and probably all human beings, too.

Amazingly, it is 13 years since there was a two-way head-to-head debate on Irish television between a taoiseach and the leader of the opposition.

VMTV’s Tonight Show has been angling hard to do the honours on this occasion for Varadkar and Micheál Martin, according to Cooper. “There is a realisation in politics that there is a very important audience that Virgin Media serves,” he said.

The big question is whether viewer magnet Love Island will be usurped from its nightly 9pm slot on Virgin Media One for the occasion, or whether, as seems more likely, the bitter tensions, dagger-throwing rivalry and Machiavellian powerplays will stay put, relegating good friends Fine Gael and Fianna Fáil to 10pm.

In the interest of balance, it’s essential to state that RTÉ is also winding up for a flurry of election coverage and has both the steering committee and the stopwatches to deliver it.

Elections are double-edged for RTÉ. They’re a reminder that the broadcaster is still the default home of the biggest news moments on Irish television. But they’re also a proven budget-sucker.

In its annual report for 2016, that year’s general election was one of four events – the others being 1916 centenary coverage, the UEFA European Championships and the Olympics – that RTÉ classed as exceptional to a normal year, even though three of those four recur fairly regularly by design. So expect RTÉ’s 2020 accounts to pointedly list the next general election in its “special events” line and, who knows, if it all gets a bit messy, maybe the next election after that.

Indeed, RTÉ political correspondent Paul Cunningham told Morning Ireland yesterday that one TD had suggested to him 2020 could be a year of two elections. “Right, well, we’ll get through the first one first,” said presenter Audrey Carville, speaking for the nation.

Despite the 13-year gap since the last two-way, the public is so used to television showdowns between politicians that the challenge for broadcasters is how to surprise them without resorting to fatuous gimmicks. How do you walk the line between the flat and the frantic?

The number one task for candidates is, as it ever was, to avoid going the full Nixon under the studio lights.

Nixon is still the number one case study – or cautionary tale – that every journalism and political science student comes across eventually. In the 1960 US presidential election, the first such election to feature a televised debate, those listening on radio thought Richard Nixon had won it, while those horrified by Nixon’s pale and sweaty face on television were swayed instead by JFK.

This began a long era of hand-wringing by people worried that the new medium would assign a Hollywood-esque priority to physical attractiveness in politics. But has it? Watching Boris Johnson and Jeremy Corbyn go toe-to-toe recently with just two glasses of water and a couple of spare lecterns off Fifteen to One between them, it was hard not to come away thinking “if only”.