‘Sunday Business Post’ put up for sale by Key Capital

Newspaper bought out of examinership for €1.2m is now believed to be trading profitably 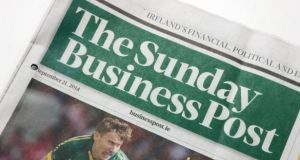 The Sunday Business Post has been put up for sale by Key Capital, which took control of it in 2013. Photograph: Bryan O’Brien

The Sunday Business Post newspaper and an associated printing business, Cork-based Webprint, have been put up for sale by their private equity owners.

Key Capital, which took control of the Post in 2013 and Webprint two years later, confirmed it has appointed BDO Corporate Finance to examine “strategic options” for Sunrise Media, the holding company for the two businesses.

Colin Morgan, the chief executive of Key Capital, confirmed on Tuesday night that this “may include a sale of all or part of the business”.

Key Capital, which is chaired by former NCB stockbroker Conor Killeen, says it received an approach for Sunrise that prompted it to appoint advisers to assess its potential exit from the business.

It is understood that tentative discussions have already been held with a number of potential interested parties.

Sunrise comprises the Sunday Business Post and the trading business of Webprint, which prints the Post and also has about 40 other printing contracts, including for several regional newspaper titles. The Post employs about 50 staff, with a further 25 employed at Webprint.

Key Capital owns the bulk of the Sunrise shares, with a minority stake of roughly 15 per cent held by Donagh O’Doherty, who runs Webprint and co-owned the printing business before Key Capital took control in 2015.

Some of the Sunrise directors, including Trinity academic Jane Ohlmeyer, Mr Morgan and Key Capital’s Conor Moran, also each own a handful of shares.

The property from which Webprint operates in Cork is separately owned by Key Capital outside of the Sunrise Media structure. It is understood that this building is also likely to become available for sale, opening up the prospect that a single buyer could take on the whole lot.

“Key Capital acquired the Sunday Business Post and Webprint at times when the businesses were in financial difficulty,” said Mr Morgan.

“The performance of both businesses has been turned around. We are happy with current trading and are excited about the group’s prospects.”

It is understood that the Post and Webprint are both operating profitably in a difficult landscape for traditional Irish media businesses.

The newspaper had a circulation of more than 30,000 in the latest audited figures for the first half of 2017. This was down 3.7 per cent, but that represents a better performance than the average across the sector. The Post has in recent years also invested in its digital operation, which sits behind a paywall.

Key Capital led a consortium, which also included former Star newspaper executive Paul Cooke, which bought the newspaper out of examinership in 2013 in a deal reported to be worth more than €1.2 million. This included an upfront payment of €750,000 plus further investment of €500,000 in the title. Mr Cooke sold his stake to his co-investors last year.

The Post was previously owned by Thomas Crosbie Holdings, which was once also the publisher of the Cork-based Irish Examiner. That newspaper is also rumoured to be on the verge of being sold in an unrelated deal.

In 2015, Key Capital bought Webprint’s estimated €15 million loans from US fund, Cerberus, which had acquired them from Ulster Bank.

It then took control of the printing business via a receiver in a consensual arrangement with Webprint. The two businesses were then combined as Sunrise Media last year.