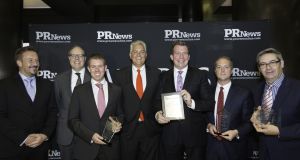 Mr Hemming left the White House at the end of August, having been the director of rapid response. His role there involved circulating positive news articles about Donald Trump’s administration.

He will report to Séamus Conboy in Red Flag’s Brussels office and John Collins in the agency’s Washington DC office.

Red Flag became the first Irish agency to win at the awards, beating off international and US competition to win two categories, one for reputation management and the second for crisis management.

Both awards were for campaigns run for the National Coffee Association in the US.

Red Flag said the campaign “not only averted a crisis that may have cost the coffee industry and the people who depend on it for employment billions of dollars, but it actually turned the issue 180 degrees and allowed people to celebrate coffee as a potential superfood”.

Red Flag, which was founded by former Independent News & Media communications executive Karl Brophy, increased its profits by 43 per cent in 2016 to €456,964 following a strong year of expansion.

It has a presence in Dublin, London, Paris, Brussels and Washington DC and is forecasting revenues of €4 million for 2017 and growth of at least 60 per cent in its profit after tax.