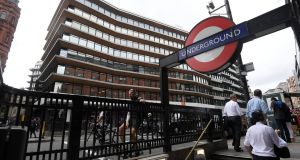 An office building containing the London HQ of Bell Pottinger: the disgraced firm is now fighting for survival amid a mass exodus of clients and staff. Photograph: Toby Melville/Reuters

The London-based agency, known for its combative tactics and controversial client list, was thrown out of the UK’s industry body earlier this month for running a campaign in support of South African president Jacob Zuma that sought to stoke up racial tensions.

The scandal has destroyed the company’s reputation and led to an exodus of clients, employees and a major shareholder. It was placed into administration last week for its own protection.

Bank of Ireland, which had employed the agency to do its UK PR, indicated yesterday it had ceased to engage the services of Bell Pottinger.

“Regarding our UK PR, we are currently making preparations for a tender process which will commence shortly,” a spokesman for the bank said. About 40 per cent of Bank of Ireland’s balance sheet is based in the UK.

The disgraced firm , which made a profit of £11 million (€12.5 million) on revenues of £33 million in 2015, is now fighting for survival amid a mass exodus of clients and staff.

Its swift downfall has sent shockwaves through the PR industry and raised questions about the tactics deployed by the company.

The controversial South African campaign, conducted on behalf of the Gupta family, had portrayed opponents of president Jacob Zuma as agents of “white monopoly capital”, with slogans referring to “economic apartheid”.

Such slogans gained traction in a country where the white minority still wields disproportionate economic power, two decades after the end of apartheid.

This was just one of a series of controversial campaigns involving Bell Pottinger. According to a 2016 report by the Bureau of Investigative Journalism, a US-funded, anti-al-Qaeda propaganda campaign that the firm carried out in Iraq included fake insurgent videos used to track those who accessed them.

Its controversial client list has included the wife of Syrian president Bashar Assad, South African paralympian Oscar Pistorius and the Pinochet Foundation, an organisation set up by supporters and aides of the former Chilean military ruler Augusto Pinochet.