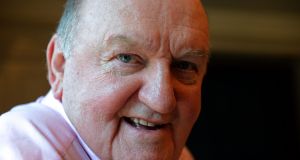 George Hook will be off the air at Newstalk until December when he will start a new weekend show.

Broadcaster George Hook is to permanently “step down” from his weekday lunchtime slot at Newstalk following the furore over his on-air comments recently about the victims of rape, the radio station said on Friday.

Mr Hook will not, however, be leaving the station.

The station said Mr Hook will return to the airwaves in December, when he will begin presenting a new weekend show.

Newstalk said it has now concluded its review into the matter and it will announce a replacement presenter for the broadcaster’s midweek High Noon show “shortly”.

Ciara Kelly has been standing in for Hook since he was suspended last week, a week after he made the comments musing whether victims of rape had to share some of the “blame” if they put themselves in positions of danger.

Mr Hook was commenting on the case of a 19-year old woman in the UK, who alleged she was raped by a man in a hotel room, to which she had returned with another man for consensual sex following a night out.

Those comments led to a tsunami of criticism of Mr Hook in social and mainstream media from victims groups, politicians and members of the public, who accused him of blaming rape victims for the crimes committed against them.

As the row gathered pace, other advertisers, most notably Tesco, also asked that their advertisements not run during High Noon.

Mr Hook issued an on-air apology for the comments when his show next aired three days later, but the criticism was not quelled. Newstalk also condemned the comments, which its managing editor Patricia Monahan said were “totally wrong and inappropriate and should never have been made”.

While Newstalk’s review was ongoing, Hook turned to a Dublin legal firm to represent him. It is understood that there was contact between his lawyers and the station ahead of the release of Newstalk’s statement yesterday. Mr Hook also sought advice from a communications professional at the height of the storm.

On Thursday night, following the broadcast of a TV3 documentary in which several women described their experiences of having been raped, Mr Hook issued a further statement to the television station.

He thanked the women – Niamh Cosgrave, Niamh ní Dhomhnaill, Winne Li and Trish Kelly – for sharing their experiences. “Thanks to their bravery and generosity, this powerful programme will make a telling contribution to deepening society’s understanding of rape and its consequences,” he said.

Mr Hook added that it is “emphatically clear that the rapist is always 100 per cent responsible for, and to blame for, rape”.

The National Women’s Council of Ireland said yesterday Newstalk should issue guidelines for its presenters when speaking about domestic and sexual violence, ahead of his return to the station in three months.

“The damage done by these comments is very real, and they must not be repeated. It is clear that more needs to be done by Newstalk, and that the station must find a way of countering the balance the impact of these comments on women,” said the NWCI.

1 ‘No demand... because there are no people’ at well-known Dublin pub
2 Revised help-to-buy scheme opens for applications
3 Nearly 30,000 could lose pandemic payment if they do not confirm eligibility
4 Digital Hub warns of need for emergency funding from State
5 AIB concedes Covid mortgage policy was ‘regrettable’
6 Stripe lures Dhivya Suryadevara from General Motors to be CFO
7 ‘Saudi Arabia is where the opportunities will happen in future’
8 Divorce: What will it cost and can you afford it?
9 UK criticised for ‘unforced errors’ on post-Brexit trade deals
10 ‘Humble’ Airbnb going back to basics
Real news has value SUBSCRIBE