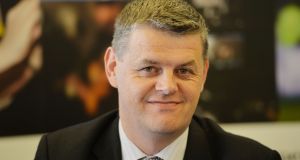 Recent moves by Google to work with news publishers to improve their chances of making money online are “a very positive step”, the chief executive of Independent News & Media (INM) told an event on copyright in Dublin on Tuesday.

Robert Pitt said he was “very encouraged” by reports that the tech giant is working with publishers such as Rupert Murdoch’s News Corp to better support paid content through search results and payment mechanisms.

He also said it would be helpful for a company such as INM, which does not currently operate an online paywall, were Google to share some of its user data with publishers.

Mr Pitt was speaking at an event on the future of publishing co-hosted by Google Ireland at the offices of the Institute of International and European Affairs (IIEA).

“What we’re seeing is the whole ecosystem has been very disruptive,” the INM chief executive said.

“We have not just got fake news, but fake advertising as well,” he said. He also cited the discovery of “very malign” ad targeting on Facebook through anti-Semitic keywords, for which Facebook has apologised.

However, Mr Pitt said Europe’s proposed “snippet tax” was not workable and was akin to trying to “put the genie back in the bottle”.

The “snippet tax”, or Article 11 of the European Commission’s copyright proposals, would require the Google News aggregator, or any platform using snippets of journalistic content online, to first get a licence from the publisher.

It has been backed by some publishing groups, such as Germany’s Axel Springer and News Corp, but others believe the measure would backfire on the industry if adopted.

“We cannot do something that will make the world more complex,” Mr Pitt said.

He said he would prefer instead if Google and Facebook acknowledged the role of news publishers by helping them develop effective payment mechanisms through their platforms and by sharing audience insights. The latter move would help news media companies secure higher advertising rates through better targeting.

“I don’t think you will find any publisher who has a dogmatic reason to object to a paywall or the monetisation of content,” he added.

Despite the “very worrying world” it found itself in, Mr Pitt said INM was “very resilient” and proud of its publishing tradition.

“I don’t think that we’re going anywhere. We have a challenge and we’ll get through it and we’ll move on, and we’re still going to be here.”

INM is understood to be seeking further redundancies from its editorial and commercial workforce in the latest in a series of cutbacks at the company, amid falling print revenues and the challenge of making money from online platforms.

Meanwhile, the planned update to copyright law, described as a “battleground issue” by IIEA director-general Barry Andrews, is seen as a key part of the EU’s digital single market strategy and has attracted fierce lobbying from interested parties.

Catherine Stihler, a Scottish MEP and copyright rapporteur for the EU’s Internal Market And Consumer Protection committee, said the legislation might not be passed in the lifetime of this European Parliament as originally hoped because the issue is so divisive.

“I believe that if we don’t have copyright reform, we don’t have a digital single market,” Ms Stihler warned in her keynote address.

During a question and answer session held under the Chatham House Rule - meaning comments can be reported, but not directly attributed - one attendee claimed journalists, filmmakers and musicians “have been reduced to Deliveroo riders” by an internet economy intent on “doing away” with copyright.