What will happen to everyone’s favourite rolling news channel amid takeover wars? 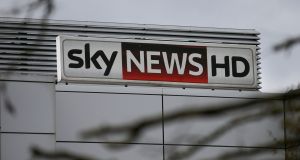 As the Dublin Castle courtyard filled up with the faces of relieved, overwhelmed and deliriously exhausted campaigners, it can have escaped no one watching on Saturday how momentous a day this was. It certainly didn’t pass by Sky News, represented in the international media scrum by the biggest of its big guns.

“They sent Kay?!” a woman replied after I tweeted my appreciation for Sky’s chaotic, but consistently atmospheric coverage (no studio panels pondering what the result might mean for Fianna Fáil). A microphone was dropped (not in the metaphorical sense), context and depth came and went, but Burley kept calm and elbowed on, ebulliently translating what had just happened for a Sky audience perhaps unfamiliar with the constitutional insult Irish women had been enduring for 35 years.

For 29 years, Sky News has been in the rough-edged business of being in the right place at the right time, sticking its cameras everywhere they should be and a few places (inside a suitcase flung from crashed flight MH17) that they should not.

The media’s tectonic plates have shifted since its shoulder-padded birth, with the internet eroding the breaking-news exclusivity once enjoyed by rolling news

Its dedicated Irish service may have been short-lived, but Sky News’s early presence in a limited line-up of Cablelink channels, combined with the proliferation of Sky’s satellite dishes, mean the brand has always been visible in Ireland, where it still defines the phenomenon of rolling TV news.

But in 2018, Sky News, to quote Philomena Cunk, is at a fork in its crossroads. The media’s tectonic plates have shifted since its shoulder-padded birth, with the internet eroding the breaking-news exclusivity once enjoyed by rolling news. And the big news on the hour, every hour, for some months now, is that thanks to some fiendishly complex merger and acquisition (M&A) manoeuvres, Sky News may soon become a little less “Sky”.

Let’s take this chronologically. While casual observers may be under the impression that Rupert Murdoch is the man waggling his fingers maniacally off-camera, the ageing mogul does not own Sky plc, the pan-European broadcaster and pay-TV group to which Sky News currently belongs. The company he does control, 21st Century Fox, merely has a 39 per cent stake in it.

For some years now, he has been keen to get his hands on the lot. Alas, a previous bid was abandoned in 2011 following the reputational disarray and political furore of the phone hacking scandal in other parts of his empire.

In December 2016, with the hacking scandal’s high noon long since past, 21st Century Fox made another bid for the 61 per cent of Sky it doesn’t own. An independent committee of Sky directors – which excluded the company’s chairman James Murdoch, who is also chief executive of Fox – accepted its offer. This reignited a slow and multi-pronged regulatory examination of what a deal might mean for UK media plurality.

A year later, Disney entered the fray, agreeing to pay $52.4 billion for various Fox assets, including its shareholding in Sky. At the time, I wrote that this created a Russian doll of proposed acquisitions and regulatory processes. Now the situation is more akin to a stadium of media giants staging an unblinking game of 4D chess, in which Sky News could be a sacrificial pawn.

Enter Comcast. The US cable and entertainment company (owner of NBC Universal) fancies taking over the very same Fox assets that the ever-hungry Disney is chasing and is said to be warming up for a rival bid.

But it has already unveiled an offer for Sky. And because its bid for Sky is better than Fox’s one was back in December 2016, Sky’s independent directors have withdrawn their recommendation for Sky investors to accept the Fox offer.

So now Sky is in talks with both 21st Century Fox and Comcast about which of them should buy it. Separately, Fox has agreed to sell assets including its stake in Sky to Disney, but Disney’s desires might yet be thwarted by Comcast if the latter makes Fox an offer it can’t refuse.

This M&A stage is so crowded even Kay Burley would baulk at ducking and weaving her way through it.

The fate of loss-making Sky News has been bounced around throughout. First, Sky threatened to close it down if it couldn’t get the (now un-agreed) Fox deal approved. Sky chief executive Jeremy Darroch said Sky News was no longer a “critical” part of its business, which must have made delightful hearing for its employees.

Then 21st Century Fox, keen to push a deal over the line after the UK competition watchdog said it would not be in the public interest, said it would either sell Sky News to Disney or ringfence it into a separate venture with independent editorial control. No “Foxification” of Sky, it effectively promised.

Now Sky’s independent directors say they are assured by Comcast’s “voluntary commitment” to fund Sky News at its current level for 10 years, believing this “should comprehensively address any potential public interest concerns”. Politicians, meanwhile, seem a lot keener on Comcast as a bidder for Sky than Fox. But whichever US behemoth becomes Sky’s ultimate owner, the fate of Sky News seems set to dangle like an offscreen boom mic for years to come.