How much does it cost to make a television show?

Here are more ‘differentials’ for the Public Accounts Committee to consider 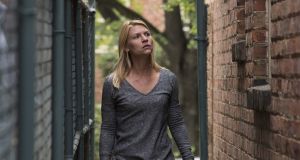 Carrie (Claire Danes) from ‘Homeland’, which costs US network Showtime a reported $3 million (€2.5 million) per episode to make and which is shown on RTÉ2 for €5,000 an hour.

How much does it cost to make an hour of television? It was hard not to feel all hope crawl under the desk to die when this question was asked seven-eighths of the way into a session of the Public Accounts Committee (PAC) with RTÉ management. So tell us, how long is that piece of string again?

But on less bleary-eyed reflection, the question from PAC chairman Seán Fleming was a pertinent one. Narrowing it down to the most expensive genre outside of premium sport, the RTÉ delegation led by director-general Dee Forbes indicated that “big dramas” – the lesser-spotted, Montrose-commissioned 9.30pm-on-RTÉ1 efforts – might cost €1 million an episode to make, while the per-hour cost of soap opera Fair City was placed at €130,000.

The starker difference was between original dramas that RTÉ has a hand in producing and those that it buys in as acquisitions. The cost of broadcasting the popular Claire Danes series Homeland, the seventh season of which has just finished its bizarre bounce around on RTÉ2’s Thursday night schedule, is about €5,000 an hour to RTÉ, while Australian soap imports such as Home and Away and Neighbours cost RTÉ about €2,000 an hour.

“I’m taken aback at the level of differential,” said Fleming, suggesting it might help RTÉ’s cause to get the message out there that making television costs so much more than merely hanging the schedule off foreign imports.

Another differential of interest to the independent sector is the cost of making programmes in-house at RTÉ versus the cost of commissioning them from outside Montrose. After a 2015 report by Government consultants NewERA fudged this issue, Screen Producers Ireland called for a robust cost-benefit analysis and an increase in RTÉ’s statutory spend on independent commissions.

What we do know is that RTÉ One’s average cost per hour (€16,200 for 2016) is about twice that of RTÉ2 (€8,300). These averages, however, include the vast stretch of time when the cost of transmission is frankly more “test card” than House of Cards.

RTÉ’s current factual programming commissioning brief to independent producers gives a better starting point for how much it costs to make an hour of prime-time television, outside the drama genre. For a Monday night documentary on RTÉ One (considered a “blue chip” slot), the maximum budget is €120,000-€130,000 per hour.

An RTÉ2 factual series can cost up to €80,000-€90,000 per hour, meanwhile, with those proposals that can be made for less deemed “particularly attractive”. The channel’s late, unlamented Reality Bites strand had a commissioning price of just €55,000 for a single hour and it often showed.

RTÉ’s response when it is accused of schedule-padding (hello, summer repeats) is that it hasn’t got enough money to deliver the volume of original content it would like, though for some, this defence does not sit well with a pay bill of almost €3 million for the 10 highest-paid presenters. But it is possible to believe that some RTÉ salaries are too high for comfort and still see that slashing them is not exactly going to fund Game of Thrones. Indeed, the way things are going, halving them wouldn’t fund much more than 10 minutes of Game of Thrones.

Internationally, the price tag on an hour of television has been subject to steep rates of inflation. RTÉ’s €5,000-an-hour import Homeland costs US network Showtime a reported $3 million (€2.5 million) per episode to make (although this is likely to vary from season to season depending on how much location filming is involved). And Homeland isn’t even in the first tier of bumper-budget shows.

The more visible escalation of late, however, has been on the production values side, with the result that the overall title of “most expensive television show in history” now seems to have a new holder every week. Amazon is said to be spending $1 billion on its forthcoming Lord of the Rings series, which at a completely unconfirmed quantity of five seasons of 10 episodes, would result in a per-episode cost of $20 million. This would put it out in front – unless some other hyped-up epic raises the stakes further.

To date, the notable big-spenders are Netflix’s axed Baz Luhrmann series The Get Down, rumoured to have cost as much as $16 million per episode, and HBO’s Game of Thrones, said by Variety to have a budget of $15 million per episode for its final showdown-laden run in 2019 (although these six episodes are each expected to have a running time in excess of an hour).

Money alone cannot guarantee that a television show is any good. Still, the task of making a good television programme becomes so much harder without enough cash. Worryingly, dramas with an RTÉ stamp on them (in reality, now always international co-productions) no longer even seem like a comparable product to the blockbuster-style, land-grab offerings from US players with global audiences and billions to spend.

It’s a vicious problem that Irish broadcasters share with much bigger organisations such as the BBC and ITV – in 2018, they can figure out elaborate ways to burn holes in their wallets and still wind up looking cheap.

1 Admission of mistake in Oxford vaccine dose raises doubts over reliability
2 Cliff Taylor: Deal or no deal we are now heading for a hard Brexit
3 Move to EU or face disruption, City of London is warned
4 Karlin Lillington: How I managed to cut my mobile phone bill by at least half
5 Last orders for Rí-Rá nightclub and The Globe after green light for Central Hotel revamp
6 Irish Life fund pays €49m for 94 Dalkey apartments
7 Fiona Reddan: Who’s afraid of Revolut? Not AIB and BOI it seems
8 Central Bank rules out changes to mortgage rules during pandemic
9 Fenergo named Irish technology company of the year
10 Lahinch Golf Club runs out of its own cash after €3m Covid-19 hit
Real news has value SUBSCRIBE