Why it is worth paying attention to Marissa Mayer

Ex-Yahoo boss has a ‘little lab’ for a big question: how consumer media can use AI 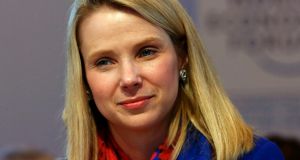 Minimalist tech sector websites are intriguing. The uncluttered design, the (mostly) plain sentences, the chasm of white spaces: some company shop-fronts go above and beyond the need to be “clean” for small mobile screens. To consumers, the message is: “We’re here to make things easy for you.” To financiers, it says: “We’re so brilliant and focused, random distractions and frills have no place in our superproductive world.”

LumiLabs.com is one such website. This is the one-page, basic template home for the new venture of Marissa Mayer, Yahoo’s last chief executive and Google’s first female engineer. Mayer announced the existence of Lumi Labs last week with a couple of tweets and an interview with the New York Times, where she referred to it modestly as “this little lab we’re working on”.

Lumi Labs is a tech company incubator concentrating on “the consumer media and artificial intelligence space”. The main site image is of some majestic, snow-topped mountains (“lumi” means snow in Finnish), though Lumi Labs is so Palo Alto that Mayer has rented out Google’s original downtown office.

After compiling a pros-and-cons-style matrix of her job offers, Mayer chose to start her career in Google in 1999 because she liked how smart the people there were

As Google’s 20th employee, Mayer was involved in the launch of key products such as Gmail and Google Maps and belonged to the three-person team behind Google AdWords. The algorithm for the last, which links advertisers’ keywords to search results, became Google’s main source of revenue, lifting it to its current status as the holder of the biggest single share of the global advertising market.

So while she may have had more downs than ups at Yahoo, ending with the company being sold to Verizon in what Forbes magazine aptly called “the saddest $5 billion tech deal in history”, when Mayer says she is exploring “the consumer media and artificial intelligence space”, it is worth paying attention.

At the very least, it is another indicator that already wealthy computer scientists, who have been around the Silicon Valley block a couple of times, believe there is money to be made by solving media business problems, or intellectual fun to be had in trying.

So far, what is unsaid could fill up those blank spaces beautifully. All that has been revealed is that Mayer and her co-founder Enrique Muñoz Torres, a former search and advertising executive at Yahoo and another one-time Googler, have “some ideas in the consumer space” and have been “humbled” by the avalanche of emails responding to a hiring call for developers.

After compiling a pros-and-cons-style matrix of her job offers, Mayer chose to start her career in Google in 1999 because she liked how smart the people there were. At the time, she estimated its chances of success at “about 2 per cent”, which were “actually pretty good odds” given the tendency for most start-ups to flounder once the initial cash runs out.

Perhaps she will better rate the prospects of the tech founders that Lumi Labs decides to back, or perhaps not. The tech sector is known for its high tolerance for failure, espousing the belief that the one good way to discover what works is to find out first what doesn’t.

Ultimately, she couldn’t detoxify the poisoned chalice that she inherited when she joined Yahoo

For me, this public birth recalled last autumn’s similarly oblique arrival on the Dublin tech scene of Neva Labs, set up by Storyful founder Mark Little and former managing editor Áine Kerr. It too has made artificial intelligence (AI) and consumer media its specialist subject. In its case, Neva Labs wants to develop tools that might give people “conscious control” of the algorithms that determine how they interact with news media – in other words, it doesn’t think “conscious news seekers” actually enjoy the power that Google, Facebook and Twitter have over them.

While the Neva Labs founders have drawn attention to “the failures of an ad-funded news experience” and extolled the benefits of subscription services, the experience of Californian tech royalty like Mayer lies closer to the pursuit of advertising dollars. During her time at Yahoo, Mayer was unable to stop the loss of ad revenue to Google and the ascendant Facebook, and the powerful media agencies that control ad spending didn’t always seem impressed with her efforts to schmooze them.

Ultimately, she couldn’t detoxify the poisoned chalice that she inherited when she joined Yahoo. Setting up a tech incubator is an obvious way, however, for her both to recapture the excitement of building new things and reboot her personal brand, free of the burden of a “decaying” legacy business.

One of the most likely serious challenges to the Google-Facebook online advertising duopoly will come from the company that makes a bigger, more convincing AI breakthrough – sophisticated targeting, ubiquitous digital assistants, the works – and then uses it to suck up advertising. Amazon is poised to be that company.

But whichever tech incubator they pass through, there will be countless other thinkers and developers who fancy having a go. The ones who succeed will be the ones with a knack for making it all look simple.

1 Second Covid-19 outbreak and no-deal Brexit an appalling vista
2 Ireland faces 'deep downturn' this year and may not rebound until 2024 if there is a second wave
3 Why the Fed thinks Goldman is America’s riskiest bank
4 Why are markets booming when a crash is on the way?
5 John FitzGerald: Civil Service expertise key to Government policy
6 ‘The rental situation stops me moving back home’
7 Dublin consultancy Pathfinder set for expansion after buyout by Sia Partners
8 Supreme Court in Dublin clears Bernie Madoff Ponzi loss case for hearing
9 How much do Irish people earn? And what will Covid-19 do to our wages?
10 Why UK supermarkets are not making super profits
Real news has value SUBSCRIBE