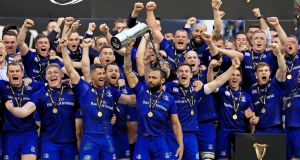 Leinster captain Isa Nacewa and his team-mates celebrate after winning the Pro14 final against Scarlets at the Aviva Stadium, Dublin, on Saturday. Photograph: PA

Turnover at rugby’s Pro14 tournament has doubled to more than €20 million over the last two years as two South African franchises have joined the competition. And it will seek further expansion next season.

Leinster emerged victorious in the competition after beating Scarlets 40-32 in the final at the Aviva Stadium in Dublin on Saturday.

Over the last nine months the league’s 152 games drew 1.2 million fans. Its turnover from ticket sales, media rights and commercial deals, including headline sponsor Guinness, was more than €20 million, double what it was two years ago.

It is about three years since the Pro14 became independent of the company that runs the Six Nations and Lions Tours. The league won’t say how profitable the business is. However, its commercial director Dermot Rigley points out the the surplus earned after costs is returned to the 14 clubs themselves.

Broadcaster Eir Sport will be showing its games next season, making it a “one-stop shop” for Irish club rugby, according to Mr Rigley. The channel also has the rights to the 2019 Rugby World Cup.

In Britain, he is optimistic that a deal with Premier Sports – run by Irish man Michael O’Rourke – will boost its profile. “You are going to see marketing like never before,” he said.

Pro14 is the only club rugby tournament with participants from the both the northern and southern hemispheres. South Africa’s Toyota Cheetahs and Southern Kings took part for the first time in 2017/18. Mr Rigley indicated that the league hopes to attract more South African teams. He sees the country as most likely to provide the competition with scope for expansion in the near future.

“South Africa is one of the juggernauts of world rugby and, not just that, it is also a very strong commercial rugby market,” Mr Rigley said.

South African participation also helps to draw support from the country’s diaspora in Europe, home to the tournament’s 12 other participants, which come from Ireland, Italy, Scotland and Wales.

Signalling its intention to grow the country’s role, the Pro14 has added Jurie Roux, chief executive of the South African Rugby Union (Saru) and former Munster coach Rassie Erasmus, now Saru director of rugby, to its board.

Mr Rigley is not ruling out expansion into the United States, where rugby is the fastest-growing team sport. He noted that both teams and individuals there are interested in joining forces with a European league.

Along with Guinness, the Pro14 has done deals with Irish companies, such as airline Cityjet, O’Callaghan Hotels and sports supplement specialist Ross Nutrition.

Its teams’ geographical spread and the competition’s length – nine months as opposed to the Six Nations’s nine weeks – enhance the Pro14’s attraction to commercial partners, according to Mr Rigley.

He explained that the competition worked with Nielsen Sports – part of the global media group responsible for TV audience ratings – to establish its reach. This allows it to demonstrate to existing backers and those that it is trying to attract that its figures stand up. “We’re very much a data-driven company now,” Mr Rigley said.

1 How long can Government afford to keep State pension age at 66?
2 Revenue publishes list of companies tapping State for wage support
3 Cosgrave Property Group secures exit from Nama
4 Developers may need to go back to the drawing board as one-beds fall from favour
5 Bake-off soy sauce tweet backfires for UK trade ministry
6 Tighter regulations for car makers will drive buyers to choose electric
7 Covid-19 will have a significantly worse impact on UK public finances than on ours
8 Halfords sees 700% increase in sales of e-scooters
9 Irish homeowners must see rates relief if they make it through Covid turmoil
10 107 jobs at risk as Broderick’s shareholder considers examinership
Real news has value SUBSCRIBE