Paul Connolly departing board after nine years as director 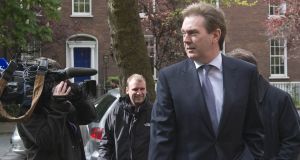 Stephen Rae, who is standing down from the position of editor-in-chief at Independent News & Media. Photograph: Brenda Fitzsimons

Paul Connolly, Denis O’Brien’s last remaining nominee to the board of Independent News & Media (INM), is stepping down.

Mr Connolly, who only put himself forward for re-election to the board of the publishing group last Friday at its agm, has “decided to resign” after nine years as a director, the company said.

Murdoch MacLennan, the company’s chairman, told investors this afternoon that he is “disappointed” that Mr Connolly is stepping down and said he would be “greatly missed”. Mr Connolly wished the company well.

Mr Connolly has long been one of Mr O’Brien’s closest business associates, and his departure will be seen as a blow to the billionaire’s influence on the board.

INM director Triona Mullane, a technology executive, was deemed to be non-independent on the board after it emerged last year she had previously-undisclosed financial links to a company linked Mr O’Brien. But she was never a formal nominee of the businessman.

Leslie Buckley, another associate of Mr O’Brien, stood down in March at the height of a corporate governance investigation swirling around the company.

Meanwhile, Stephen Rae, editor-in-chief of INM throughout most of Mr Buckley’s reign, is also to stand down from his position.

News of his departure emerged on Tuesday evening and the company and Mr Rae issued an agreed statement on his move on Wednesday.

Mr Rae said he had “completed my five-year term” as group editor. He also paid tribute to those with whom he had worked in his 25 year career at the company.

“I am now looking forward to taking on new digital projects which will focus on my core interests of developing new revenue models for journalism, along with the hugely important editorial fight against misinformation in news and media,” said Mr Rae.

The company’s chief executive, Michael Doorly, thanked Mr Rae for his contribution to the company “over many years”.

The exits mark the latest development in a period of tumult at the media company which has recently undergone a major change to its board membership and is fighting efforts by the Office of the Director of Corporate Enforcement (ODCE) to have inspectors appointed to the business.

INM has lost both a chief executive, Robert Pitt, and a chairman, Mr Buckley, in the past seven months. Several other directors, including Jerome Kennedy and Allan Marshall have also stepped down from the board. Terry Buckley, another INM director, has also signalled his intention to leave.

Sources have indicated that Mr Rae will be replaced by Richard McClean, the current managing director of the Belfast Telegraph, but this has not been confirmed.

It is understood Mr McClean will be appointed head of publishing. The role of group editor-in-chief is being discontinued.

Mr Rae (51), a native of Co Kerry and long time member of staff at the media group, was appointed to the overarching position of editor-in-chief in June, 2013. At the time, the company said the new position had been created to ensure that the titles are “structured, resourced and aligned for an increasingly digital future”.

As editor-in-chief, Mr Rae had overall responsibility for the Irish Independent, Sunday Independent and Herald titles.