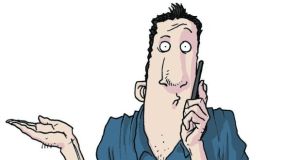 A photograph of a child visiting his father in prison and an allegation the Ross O’Carroll Kelly column is racist against English people were some of the issues decided on by the Press Ombudsman last year.

Of these he made rulings on 32 complaints, with most of the remainder being abandoned by the complainant, ruled inadmissible or resolved without the need for an investigation.

The Press Council received 15 appeals of Mr Feeney’s decisions from both publications and complainants. Of these, three were upheld.

The figures and some details of the cases are contained in the Press Ombudsman annual report.

In one matter, Bulelani Mfaco of the Movement of Asylum Seekers in Ireland (Masi) complained about the publication of a derogatory word for black people in full in The Irish Times. The word was printed in quotation marks in a court report concerning a man accused of racially abusing a taxi driver. It was quickly replaced with a censored version of the word.

Mr Mfaco alleged its publication was in breach of the code of the Press Council’s conduct of practice. His complaint was rejected by the Ombudsman but upheld by the council on appeal.

A woman complained to the Ombudsman that her underage son’s privacy was breached when they were photographed by the Sunday World visiting his father in prison. The Ombudsman upheld the complaint and ruled that even though the child’s face was pixelated he was still identifiable.

His decision was overturned by the council which found the photographs had been taken in a public place and the newspaper had taken “reasonable steps” to conceal the boy’s identity.

The Ombudsman rejected a complaint that the satirical Ross O’Carroll Kelly column in The Irish Times contained racism towards English people. The complainant took issue with a column detailing “anglophobic abuse” by children towards English fans at a rugby match.

Mr Feeney said he accepted the complainant was offended “by the remarks made by the fictional children” but “that there was no intention to cause grave offence or to stir up hatred on the basis of nationality.”