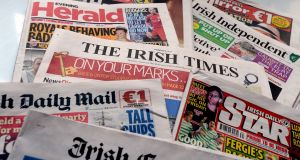 British newspaper publisher Reach has been cleared to buy the 50 per cent of the Irish Daily Star that it does not already own, with the deal expected to be completed as early as next Monday.

Reach, the company behind the Mirror titles, agreed to buy the stake from Independent News & Media (INM) in July.

The news group originally acquired its 50 per cent stake in the Irish Daily Star in 2018 when it bought the news publishing assets of Richard Desmond’s Northern and Shell.

It has now secured clearance from the Competition and Consumer Protection Commission (CCPC) and Minister for Tourism, Culture, Arts, Gaeltacht, Sport and Media Catherine Martin.

Reach said it would work with INM on a transition plan for the newspaper and its websites, which include Buzz.ie, over the coming weeks. The newspaper will continue to trade through Independent Star Ltd, which will become a fully owned subsidiary of Reach.

“We are pleased to have secured regulatory clearance and look forward to building on the success of the Irish Daily Star and Buzz.ie,” said Reach chief executive Jim Mullen.

“We will work with Reach to ensure a smooth transition, and we are confident that the Irish Daily Star has a bright future ahead within the Reach portfolio.”

Joanne McGreevy, Reach’s marketplace publisher for Ireland, said the Irish Daily Star and the Irish Daily Mirror gave the company “huge scale” in the Irish tabloid print market, “which will be really attractive to advertisers”.