Irish Times wins 10 out of 25 categories, including News Website of the Year 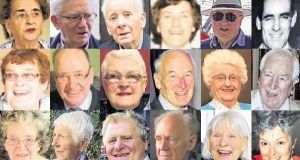 Lives Lost, which won the Overall Journalist of the Year award, featured articles on people who died from the Covid-19 pandemic in Ireland and among the diaspora.

This year’s awards, which were sponsored by the National Lottery, were presented over two nights in online ceremonies from the Guinness Storehouse. The Irish Times won in 10 of the 25 categories.

Lives Lost, which was edited by Ruadhán Mac Cormaic, won the Overall Journalist of the Year award. It featured articles on people who died from the Covid-19 pandemic in Ireland and among the diaspora.

Tim Vaughan, chairman of the judging panel, said the “real significance” of Lives Lost was that it “reclaimed” each victim from being “just another anonymous Covid statistic”.

“In years to come, the series will no doubt provide a snapshot of social history for future generations to look back on this terrible time,” he said.

We are very, very happy about this 🙂. It takes so much hard work, imagination and creativity by very many people (all over the country, day and night) to produce The Irish Times websites and apps. Totally chuffed ! https://t.co/dJ6peau1Cw

“Above all, and it's hard to overestimate how important this is, the real significance of Lives Lost is that it helped to reclaim these mothers and fathers, grandmothers and grandfathers, sons and daughters, from being just another Covid statistic and gave back rightful dignity to their memory. That, by any definition, is journalism that matters.”

The other awards won by The Irish Times on Wednesday included Broadsheet Feature Writer, which was taken by Security and Crime Editor Conor Lally for work including coverage surrounding a former garda who was dismissed in 1982 because he was gay.

The award for Best Use of Video went to Enda O’Dowd for his video entitled The Liffey Swim, while irishtimes.com was named News Website of the Year.

The Headline of the Year award was won by the Irish Daily Mirror for The Parting Glass, which was accompanied by a photograph of Padraig Byrne saying goodbye to his dying brother Francis through a window during the pandemic.

The award for Features Writer (Popular) was won by Maeve Quigley of the Irish Daily Mail, while Crime Journalist of the Year went to Patrick O’Connell of the Sunday World.

Elsewhere, Ken Sweeney of the Irish Sun was named Showbiz Journalist of the Year; John Burns of the Sunday Times won Critic of the Year; and Marion McKeown of the Business Post was credited with Best Foreign Coverage.

Inside Politics, presented by Hugh Linehan and produced by Declan Conlon, won Podcast of the Year. Newspaper Magazine of the Year was awarded to The Irish Times Magazine, edited by Rachel Collins and Ciara Kenny.

The awards were open to any work published in print, online, mobile, video, audio or any other news delivery format from any NewsBrands Ireland member title. The Irish Times had the highest number of entries on the shortlist, with 35 nominations.