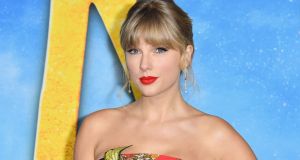 Taylor Swift has confirmed that the rights to her first six albums have been sold to a private equity firm without her knowledge. Photograph: Angela Weiss / AFP

Nobody’s buying albums anymore – nobody, that is, except investment firms that eye their master recordings as cash cows. Enter Los Angeles-based Shamrock Holdings, which has bought the master rights to Taylor Swift’s first six albums in a deal worth more than $300 million.

Shamrock has shelled out for the rights to the singer’s work from her Big Machine Label Group days, up to and including 2017’s Reputation, meaning it will earn revenues from the streaming, sales and licensing of songs like Shake It Off, Blank Space and Bad Blood. That’s its plan anyway.

In one of the fiercest, strangest and most riveting battles for control in an industry notorious for them, Swift is proceeding with a plan of her own: to re-record those six albums in a move she regrets to inform Shamrock will “diminish the value of my old masters”.

Her issue isn’t with the firm per se. This is part two of a story that began in June 2019 when a music executive called Scooter Braun acquired all of Big Machine for $300 million – with the Swift catalogue then estimated to be worth $140 million of the total.

It was a deal that left her feeling “sad and grossed out”. She had “for years” tried to buy the rights to her own work, only to see it sold instead to a man she accused of “incessant, manipulative bullying”. Anyone familiar with Swift’s video The Man, in which the singer appears in drag urinating over a subway “no scooters” sign, will understand how bad the blood is here.

This time around, she says Braun’s team refused to let her look at the Big Machine books with a view to buying back her own masters unless she signed a non-disclosure agreement “stating I would never say another word about Scooter Braun unless it was positive”. Negotiations understandably stalled.

Now, with Braun set to continue to profit from her early albums under the terms of the sale, she remains intent on re-recording them – a process that has to date “proven to be exciting and fulfilling”.

Her hope is that fans will choose to listen to the new versions, not the ones that enrich her enemy. Well-versed in this saga as they are, they will likely comply.

Indeed, judging by the performance of Swift’s lockdown hit album Folklore, her star is only going up. The direction of the value of Shamrock’s investment is less clear.