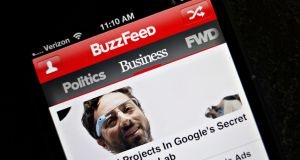 BuzzFeed has acquired HuffPost from the telecoms group Verizon, in the latest move to consolidate the ailing digital media sector.

Under the terms of the deal, Verizon’s media arm will emerge with a minority stake in BuzzFeed. The groups also said they would syndicate content across each other’s sites and partner on advertising initiatives.

BuzzFeed is not spending any cash for HuffPost. For its part, Verizon will also inject cash along with the business in return for the minority stake in BuzzFeed. The size of the stake and cash involved could not immediately be learned.

The deal comes at a time when digital media companies, which once attracted billions of dollars from venture capitalists, are struggling to stay afloat as already shrinking online advertising revenues have taken a further hit from the coronavirus pandemic.

While publishers such as The New York Times and the Financial Times have subscription revenue to cushion the blow, digital media groups rely more on ads.

Jonah Peretti, chief executive and founder of BuzzFeed, sounded the alarm two years ago when he predicted players in the sector would need to band together to achieve scale and compete with big technology companies.

On Thursday he said the agreement with Verizon would give his media company “more users, spending significantly more time with our content than any of our peers”.

Mr Peretti was one of the original co-founders of the Huffington Post in 2005, along with Arianna Huffington. In 2011 AOL bought the company for $315 million, and it became part of Verizon in 2015 when the telecoms group acquired AOL.

It was reported last year that Verizon was sounding out buyers for HuffPost.

There have been a number of casualties and deals in the digital media industry over the past two years. Vox bought New York Media, the company behind the flagship magazine and sites including Vulture, while Group Nine acquired PopSugar and Vice bought Refinery 29. Other sites, such as Mic and Tavi Gevinson’s Rookie, have shut down.

BuzzFeed anticipated it would be profitable this year, despite the carnage in advertising in the first half of the year.

The group in the third quarter made a profit for the first time since 2014, according to an internal memo . – Copyright The Financial Times Limited 2020