Greencastle follows up deal for JOE.ie by buying Lovin Media 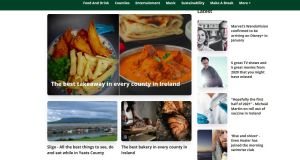 Greencastle Capital, which recently completed the acquisition of a €10.5 million deal for JOE.ie and HER owner, Maximum Media Network, has followed this up with a deal to buy Lovin Media Group for an undisclosed sum.

The venture capital firm said that as with the deal for Maximum, it has signed a management services agreement with London-listed company Iconic Labs, to manage the digital publisher founded by Niall Harbison. Under the agreement, Lovin will remain a separate brand retaining its distinct identity.

Lovin Media, which was described as being “operationally profitable”, is best known for its lifestyle and entertainment content focusing on things to do in Ireland, and Dublin in particular. It employed 21 people at the end of 2018.

Mr Harbison, who founded the publisher in 2011, sold his remaining one-third stake in Lovin to businessman Emmett O’Neill in mid-2018. Mr O’Neill, the former chief executive of Topaz and the man behind the successful rollout of the Smiles Dental chain, was already the publisher’s largest investor with a more than 50 per cent stake in the company. Former Irish rugby player Jamie Heaslip was also a shareholder.

The owners of Lovin issued an information memo for a potential sale in July 2019. The last publicly available abridged accounts for the company show it had accumulated losses of just over €1 million at the end of 2018.

Greencastle claimed that with the new deal, it is now the largest digital media house in the Republic with its brands collectively reaching every social media user in the country more than once per week.

The VC, which also purchased JOE’s UK business out of administration earlier this year, said it intended to invest in the Lovin brand over the coming months to create long term sustainable growth.

“We are very excited to announce the acquisition of Lovin Media. It is Ireland’s most recognisable lifestyle publisher brand and a valuable addition to our portfolio. It complements our commitment to the Irish market, and our belief that Irish brands are important to a wider media landscape,” said Greencastle partner Paul O’Donohoe.