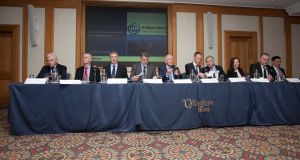 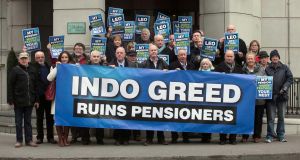 Current and former employees of Independent News and Media protesting over significant cuts to their pension entitlements before an EGM at the O’Callaghan Alexander Hotel, Dublin. Photograph: Gareth Chaney Collins

“What on earth has happened to this company? Is there no morality left?” asked Martin Fitzpatrick, pensioner and former business correspondent of the Sunday Independent.

In front of him at the top of a large function room in Dublin’s Alexander hotel sat members of the board of Independent News and Media (INM) – nine men and one woman –who were there for the extraordinary general meeting (EGM) called to restructure the company financially, paving the way for possible dividend payments to shareholders.

Part and parcel of the exercise is the closure of INM’s two defined benefit pension schemes.

Pensioners lost about 40 per cent of their entitlements in a 2013 agreement under which the company undertook to put €5.6 million a year into the schemes for 10 years. But INM has now renounced that agreement and pensioners face a further cut of up to 30 per cent. However, INM’s balance sheet will be about €24 million better off if the capital restructuring is agreed by the EGM and ratified by the High Court, and there will be a projected end of year cash reserve of €86.4 million.

In the centre of the table was chairman Leslie Buckley, a slight stoop accentuated by leaning forward in his chair, looking grim and not entirely happy. The corners of his mouth seemed permanently turned down.

To his right sat Robert Pitt, INM chief executive with whom Buckley has recently had a fairly major difference of opinion as to the value of Denis O’Brien-owned Newstalk FM if it were to be bought by Denis O’Brien-controlled INM.

To Pitt’s right sat Michael Doorly, INM company secretary and chairman of the trustees of the pension schemes which the board will no longer support. Doorly recently told Ryan Preston, INM chief financial officer, who was sitting just a few places down the table, on Buckley’s left, that the pensions decision was without moral or legal justification.

To Preston’s left in turn sat Jerome Kennedy, INM’s senior independent director to whom Pitt turned for assistance when confronted, by Buckley, with a valuation for Newstalk believed to be between €10 million and €20 million more than the valuation which Pitt had obtained.

And further along at opposite ends of the table there was, at one end, Terry Buckley and Len O’Hagan, and at the other Tríona Mullane, David Harrison and Allan Marshall.

If this was the occasion of a jolly, happy family photograph, it did not show. This was just business.

Outside, about 150 former and retired INM journalists, clerical and printing staff, journalists from other media and a handful of politicians (Social Democrat TDs Catherine Murphy and Róisín Shortall, and Senator David Norris among them) milled around the hotel entrance and displayed a banner expressing their feelings.

At a press conference in support of the demonstration, the general secretary of the Irish Congress of Trade Unions, Patricia King, appealed to corporate Ireland to blackball INM.

“Corporate Ireland should call this out,” she said, citing how business opinion in Britain rounded on Sir Philip Green after he sold BHS (British Home Stores) for £1, and walked away from obligations to its pensioners.

Séamus Dooley of the National Union of Journalists said Minister for Communications Denis Naughten should use his muscle and set up a panel of experts to look at INM’s bid to take over Celtic Media, taking into account INM’s corporate governance and treatment of its pensioners.

In the hotel’s Aston Suite, there were just two items on the agenda. Resolution one, to magic off the balance sheet in the way only accountants can, losses of €1.12 billion; resolution two, to make go away a pile of authorised deferred shares, “created as part of a capital reorganisation exercise carried out by the company in 2013”.

It was all legacy stuff, said Buckley. In the two decades before 2008, “the company expanded overseas and acquired international media assets in a diverse range of countries such as Australia, India, New Zealand, South Africa and the UK”.

Now, it was all different. “The current board and management in INM inherited these legacy issues. The one thing we will all be in agreement with is that these assets were, unfortunately, greatly overvalued.”

Throwing discussion open to the floor, Buckley said: “I will deal with questions relevant to the resolutions.”

Martin Fitzpatrick, who was also for 13 years an INM pensions trustee, said he and others regarded their pension as their life savings. Everyone in the company used to understand that, he maintained.

“Is that no longer the case?” he asked. “You people who are running the company seem so blinded by the requirement to resume dividend payments that you have lost sight of the obligations to your employees, the people that created the wealth that you want to distribute to yourselves.”

William Martin Murphy, an opponent of trade unions in the 1913 Lockout and former owner of the Independent, “would not have stolen his employees’ life savings – he was far too moral to do a thing like that,” said Fitzpatrick.

Buckley said he would take just two further questions on the pensions issue.

“Excuse me,” said a woman, “there’s 100 people standing outside that door who are due to lose their pensions. Can you take more than two?”

John S Carr, a shareholder and corporate governance consultant, who said he was utterly dismayed to read about the Newstalk spat – “it’s a classic conflict of interest case” – asked about the role of the independent directors in that issue. There was a requirement in the Companies Act that directors acted in the interests of the shareholders , “not of a particular shareholder”.

“Just because it is legal to screw your workers doesn’t mean it is compulsory,” said Dooley.

Specific pension questions to Buckley and Preston could not be answered as the company was in discussion with the pension trustees, said both men.

The voting did not really matter. A count of the show of hands was never going to overturn the 760.1 million votes already cast by proxy in support of the resolutions.