Row over proposed Newstalk bid has settled, but unity a hard ask 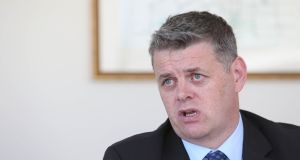 Even for Independent News & Media (INM), the EastEnders of corporate Ireland, this week’s soap operatic boardroom split was an extraordinary affair. It would appear to be in nobody’s interests to allow it to continue. So are we now approaching the endgame?

As revealed in The Irish Times, a serious disagreement emerged between chief executive Robert Pitt and chairman Leslie Buckley over the the price tag for a proposed INM bid for Newstalk, part of INM main shareholder Denis O’Brien’s Communicorp radio stable.

The company has admitted an “issue” emerged between the chief executive and Buckley, who has for years been O’Brien’s right-hand man across his business empire. The row was serious enough to warrant a complaint by Pitt to the INM senior independent director and an investigation by a board committee.

Pitt, who commissioned a valuation from Davy, wanted to pay a lower price for Newstalk than the IBI valuation produced by Communicorp. According to several sources contacted by this newspaper, a substantial gulf existed between the two valuations, with the higher valuation thought to be as much as double INM’s.

The company declined to comment on this aspect of the row.

One wonders what minority shareholders such as Farringdon Capital’s Dutch hedge fund manager Bram Cornilesse, who holds more than 5 per cent of INM, make of the price row – and INM’s apparent willingness to pivot unexpectedly into the radio market.

Pitt is understood to have been close to departing his role over the row with Buckley. But for now, the status quo appears to be holding.

It is thought he will be present at Monday’s extraordinary general meeting in the Alexander Hotel in Dublin, where INM will seek investor approval for a share restructuring that could pave the way for a dividend for O’Brien and other shareholders. Buckley will be there too, seated, presumably, next to Pitt.

It is difficult to see such a show of unity can be sustained, given the events of the last week. Both Pitt and Buckley are pugnacious characters, but something will surely have to give, and soon, whatever the price.