Changes to the pension scheme at INM are a breach of trust, say former staff 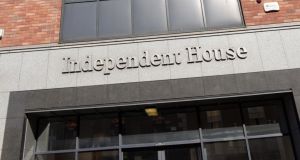 “The nearest thing to a sacred trust between an employer and an employee is making provision for old age. The Indo is breaking that sacred trust.”

“When I took redundancy, I expected a pension of €24,000 when I turned 66. That figure went down to €12,500 because of poor performance by the fund during the years of recession. With the proposed change now, I’ll will be lucky to get €8,000.

“People put their lives, and their families, on hold to get the story for the Indo and this is what they get.”

Peter O’Connor (60) did clerical work in the INM circulation department; made redundant in 2004 after 30 years. Wife Noleen worked in INM cashiers for 25 years, also made redundant. Both were in Siptu, both have deferred pensions.

“The way it all unfolded with the way most clerical staff were forced out in 2004, you were looking to the pension scheme, hoping, that it would bring financial security in retirement. We’re really in a situation now that you are unclear what the financial circumstances will be at 67.”

“I’m not in a position to put money by to buy [an extra] pension. What is it going to be like at 67. I could be in pension poverty.”

“My pension should be close to €28,000 but with the agreement of 2013, I lost about 40 per cent. What angers us all, members and deferred members, in all unions, is that was all agreed in 2013 and now, three years later, they’re going to welch on that agreement.

“They should adhere to the 2013 agreement because it was signed in good faith. . . By closing the scheme and getting it off the books, they will be €24 million better off and can start paying dividends to shareholders. That’s the purpose of this whole thing.

“My earning ability at 63 to make up for this isn’t good.”

1 Farmer seeks to challenge €3.6bn Intel plan in High Court
2 Fallon & Byrne founders McHugh and Byrne exit group
3 Cosgrave should give his speech to Web Summit’s partners in Saudi Arabia
4 Who are Ireland’s 17 billionaires?
5 Paschal Donohoe's biggest regret: 'Not managing the National Children’s Hospital better'
6 Election proposals may make the housing crisis worse
7 My father in a nursing home wants to gift me his house
8 RTÉ’s multiple lobbying meetings with politicians
9 RTÉ set to spend €350k on hotels – but celebs will have to buy their own alcohol
10 Are there annual limits on inheritances or gifts to a child?
Real news has value SUBSCRIBE

Explorer Petrel gets wider injunction to block share sale 20:33
Council tells Johnny Ronan firm to keep the noise down at D4 Embassy venue 20:29
European shares up as investors bet on economic uplift in 2020 20:08
RTÉ set to spend €350k on hotels – but celebs will have to buy their own alcohol 19:07
Credit headwinds remain despite positive 2019 – S&P 18:56
Search executive
jobs on irishtimes.com