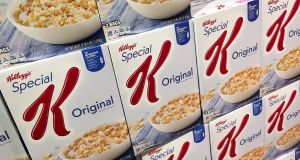 Breitbart News responded to Kellogg’s decision to pull its ads by calling on its readers to boycott the cereal brand. Photograph: Saul Loeb/AFP/Getty Images

The announcement last week by Kellogg’s that it is to stop advertising on Breitbart News was not surprising. The US website, whose former executive chairman Steve Bannon was appointed by president-elect Donald Trump as his chief strategist, gained notoriety and a boost in popularity during the US election campaign.

On the right-wing site, which has seen its readership grow from 12 million to 19 million, articles with headlines such as “Would you rather your child had feminism or cancer” and “Birth control makes women unattractive and crazy” sat alongside features warning about “Muslim invaders” and others with anti-Semitic references.

It’s not difficult to see how Kellogg’s (or indeed any consumer brand) would baulk at seeing its products in such an environment. In a statement to Bloomberg last Thursday, Kellogg’s spokeswoman Kris Charles said: “To be clear, our decision had nothing to do with politics.” She went on to explain that the move was prompted by customer complaints and that the site’s content was “not aligned” with the company’s values.

Furthermore Kellogg’s – a global brand with a meticulously-controlled communications message – didn’t know its advertising was on the site. And that’s a new and troubling feature of advertising in the digital age.

Digital advertising is cheap and nimble compared to traditional media, and brands mostly engage with it through programmed placement, whereby the agency handling the media buying promises a defined number of views for the advertisement and then, subject to certain parameters, algorithms hunt the web to deliver those eyeballs.

BMW’s statement last Wednesday on foot of the Kellogg’s decision (one that was soon followed in the US by Allstate and Warby Parker) that it would cease “targeted advertising on Breitbart” was probably more realistic about the way digital works.

The corporate clash between Breitbart and Kellogg’s reflects a wider engagement by a new, politicised and social-media savvy movement that is seeing consumers flex their considerable muscles.

The #Grabyourwallet campaign in the US gained momentum after the Trump win, urging consumers to boycott businesses selling or supporting his or his family’s products. In the UK, the #stopfundinghate campaign emerged during the run-up to the bitterly divisive British referendum on EU membership.

Its Twitter tagline states its post-Brexit mission: “Don’t hate the media – change the media. Help us take on the divisive hate campaigns of the Sun, Daily Mail . . .”

Its most high-profile win was last month when Lego announced – via a tweet to @stopfundinghate – that it was ceasing its toy giveaway promotion with the Daily Mail. A British consumer, Bob Jones, had written to the Danish toy brand saying the newspaper’s headlines prompted a “distrust of foreigners” and, concerned about the brand’s commercial relationship with the paper, that he would not be comfortable buying Lego for his child.

The toy brand issued a statement explaining its decision to end the promotion saying: “We spend a lot of time listening to what children have to say. And when parents and grandparents take the time to let us know how they feel, we always listen just as carefully.”

“People expect brands to have ethical values that chime with their own,” says Nolan. “People publicly share the brands they’re consuming more than ever before – through their own social media engagement such as on Snapchat or Facebook for example – so that there’s a need to make sure our brand choices are more closely aligned to our own values.”

Breitbart News responded to Kellogg’s decision to pull its ads by calling on its readers to boycott the brand, saying the cereal maker’s action was “un-American” and “an act of discrimination and intense prejudice”.

“The only sensible response is to join together and boycott Kellogg’s products in protest,” said Breitbart chief executive Larry Solov.

Global brands have traditionally made it their public position that they are outside politics – and the statements from both Lego and Kellogg’s made clear that their actions are apolitical and entirely about brand values. But in an increasingly polarised political environment, consumers will find it difficult not to see these sort of corporate decisions in a political context and to draw their own conclusions.

“Part of the zeitgeist is now for a brand to show where they stand,” says Nolan, “this is the first crack in that corporate veneer that doesn’t take sides.”