Interview: Denis Naughten has his work cut out with tricky portfolio 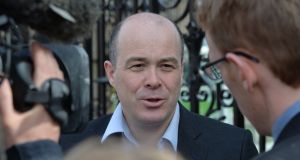 It’s late when I meet Denis Naughten, and his earlier engagements that day have included a big telecoms industry lunch, full of Eir, Siro and Virgin people. In the manner of a new Minister not yet used to being a candidate for the stocks, he jokes that it was a chance for the big telcos to pelt him with tomatoes.

“Actually, the exact opposite,” says the Independent TD for Roscommon-Galway and Minister for Communications, Climate Action and Environment. “I can’t talk about the elephant in the room when we’re having chit-chat, particularly when you have the three bidders [for the National Broadband Plan] at the table.”

Alas, the National Broadband Plan is turning out to be less of a stampeding elephant than it is a large snail. Minutes before we meet, a passing Fianna Fáiler was compelled to share his tales of broadband woe with Naughten’s press adviser: “We can’t even watch Netflix, ” he said sorrowfully.

“Look, we’re all hugely frustrated with the lack of broadband services in the periphery of many of our towns and rural areas,” says Naughten, having guided me to the office of absent colleague Paschal Donohoe across the hall from his own.

Is it true that the latest delay is due to a fear that the contracts, once awarded, will be immediately subject to legal challenge? “There is always the potential for a legal challenge in this process – and it is a very complex process. A contract is 1,000 pages long,” he says.

He promises to have “shovels in the ground” by 2018 and says he is focused on eradicating “bottlenecks” from the system before then, “rather than doing what most politicians do, go and whinge and say this is terrible and wringing your hands”.

In the new year, there’s the auction of the 3.6GHz band spectrum, which will increase wireless broadband capacity while, in preparation for 5G, Naughten has allocated €8 million to RTÉ to decommission the digital terrestrial television infrastructure that currently uses the 700Mhz spectrum and “retune” it. This is two summers’ work, meaning the 5G auction will “take place in 2019, hopefully . . . 2019-2020 . . . 2019, probably”.

The reason this has to happen is that mobile data usage has exploded, largely as people consume – or try to consume – Netflix and myriad other sources of video. He is not averse himself to some streaming.

“Video is a hugely powerful medium and we, as politicians, are not using it to the extent that we should. Facebook Live is great, because you get live interactive feedback, so it’s the town hall meeting on a far greater scale,” he says. (You probably still need to be in a town to access it, though.)

Silicon Valley’s triumph is the Irish media sector’s burden, however. There’s a divorce between who produces content (including journalism) and who collects the advertising cash on it, as RTÉ director-general Dee Forbes had the day before told the Oireachtas communications committee. Can Ireland on its own do anything to tackle this? Would it even want to?

“Oooh! Very difficult on our own to do something in relation to it. But remember that we are one of the biggest players in Europe in relation to the digital sphere, and maybe it’s an issue that I need to talk to digital ministers about at European level.”

The damaging impasse on funding for public media, which he says has resulted in a loss of €40 million to the sector, he surely can do something about. He has kept the proposed household broadcasting charge – postponed and then shelved by two ministerial predecessors – locked away in the deep freeze, and yet media executives, both in and outside Montrose, continue to bring it up wistfully.

So has he a plan to do anything about the licence fee?

“Look, I could have continued on with the broadcasting charge . . . ” he says, before the door opens.

“Good evening, Minister, how are you?” says Naughten.

Donohoe: “Very well, thank you. Have I walked into the right office?”

Donohoe: “I rarely use this office.”

Naughten: “That’s why I always use it.”

Donohoe: “Apologies, I’ll phone ahead next time, I will.”

We hurriedly transfer to another vacant ministerial office. I ask Naughten what’s wrong with his own office. Has he got the National Broadband Plan in there?

“Ahhhh, I’ve got more than the National Broadband Plan,” he says ruefully.

So, the licence fee? There is a sense that, if nothing is done, RTÉ and the wider concept of public service media slides into irrelevance.

Instead, he will be bringing a memo to Government that revives some of the other ideas floating around in the last couple of years – and another that seems clever in its simplicity.

He mentions the rise in the number of households who sign declarations saying they have no television set. “We’re looking at the legal definition of that,” he says, “because a lot of those people use the content.”

I mention the British government’s rather swift extension of the licence fee to households that don’t have a TV set, but use the BBC iPlayer. “That’s right, yeah,” he says.

But will the deficit-laden RTÉ be obliged to shrink?

“Dee Forbes is doing a root-and-branch review of the organisation at the moment. I haven’t received anything back from Dee yet,” he says, adding that he has no “hard and fast position” on it.

He notes that the Oireachtas communications committee has also been charged with “exploring ideas” on public media funding. It’s all part of the “inclusive approach” of a minority Government, he suggests.

Commercial radio, which has long chased public media funding, was initially optimistic about Naughten’s appointment, if only because a minister who has to stand for re-election in Roscommon-Galway rather than a Dublin constituency has a more intimate understanding of local radio. Its private reaction to headlines implying he was about to give a share of public media cash to newspapers was an unimpressed “join-the-queue”.

“No, I never said anything about sharing any part of the licence fee with the newspaper industry. That’s not what I said at all,” Naughten says. “What I said was we need to look not just at public service broadcasting, but public service journalism and how do we ensure we have content we can rely on. That may mean that funding in the future would not just go to broadcasters, but to journalists as well.”

He hasn’t looked at the Independent News & Media acquisition of Celtic Media yet, which the National Union of Journalists has urged him to block. He believes media plurality is challenging, but critical - he learned from his time as an Opposition spokesman that it could be “very difficult to get your message across” without it. But there weren’t the same social media platforms then as there are now. “With technology you have the opportunity, to provide plurality in a different way.”

At 43, the man who once held the record for being both the youngest ever senator and youngest ever TD is no longer the baby, but he’s still young for a national politician. Born in Drum, Co Roscommon, he was elected to the Seanad in early 1997 at the age of 23 when he inherited the seat in a byelection after the death of his father, Liam Naughten, in a car crash.

At 24, he was elected to the Dáil for Fine Gael, but he resigned from the party in 2011 over the closure of Roscommon County Hospital’s emergency department, a move that helped secure his re-election as an Independent.

He always had “a huge interest in politics” but “probably would have stuck” with being a research scientist in UCC for longer if events hadn’t taken the turn they did. He had begun a PhD in extracellular polysaccharide production, but didn’t complete it. He says something about lactic acid I don’t quite catch.

“I’ve been out of the country every single week since the beginning of September and all of them have been in relation to climate,” he says, managing to sound simultaneously energised and weary - the classic demeanour of a busy person.

He must be aware of the criticism that Ireland specialises more in climate inaction – that we’re “a delinquent country” on climate, I say, quoting Prof John Sweeney.

There’s a flicker of agitation. “I think that’s an unfortunate comment to make in relation to it. In some areas, we are leading the world, and it is disappointing that people who make comments like that tend to airbrush over it.”

On agriculture emissions, there is “more work to do, absolutely”, but his meeting in Marrakesh about pooling research with other agricultural countries such as New Zealand, Uruguay and Argentina, will serve to encourage developing countries to sign up to the 2040 targets. If they see agriculture has been decimated in a country such as Ireland, “they are not going to go down that road”.

“Look, our 2020 targets were virtually unachievable when they were signed up to in the first place,” he says. He warns against “lecturing” and says “bringing people with us” is what has to be done. He talks about improving air quality as a way to persuade the public of the immediate benefits of tackling climate change.

As our time is running out, I rattle out a few more questions. No, he has no plans to rejoin Fine Gael. Yes, he thinks rural voters are being forgotten, just look at the “bloody nose” of a general election result. And, yes, it is very different being a Minister.

“My running career has gone down the tubes since I became a Minister and definitely my cycling career has gone down the tubes. Getting out can be very difficult,” he says. It’s 8.30pm, but he isn’t anywhere near finished for the night. His next engagement is in Ballymount to talk about “new politics” on TV3’s Pat Kenny Tonight. I don’t know if the new politics of policy-by-committee is any better than the old politics of “just bulldozing through”, as Naughten puts it, but he seems an effective advocate.

And while he might only be the temporary caretaker of some big problems, he exhibits a decent grasp of the array of intricate policies and “practical stuff” that could alleviate their worst effects – if they, and he, are given a chance to do so.

Position: Minister for Communications, Climate Action and Environment and Independent TD for Roscommon-Galway.

Family: Married to Mary Tiernan. They have four children: Liam, Ada, Eoin and Ella. He is the son of the late Liam Naughten, a former TD and senator.