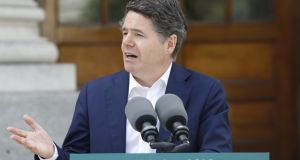 Minister of Finance Paschal Donohoe said he ‘fundamentally disagreed’ with any attempts by insurers to reject business interruption claims on the basis that Government advice for businesses to close did not amount to an order to do so. Photograph: Photocall Ireland/PA Wire

Paschal Donohoe warned Insurance Ireland that the response of some of its members to the coronavirus pandemic risked causing “irreparable damage” to the industry’s reputation, according to a report in the Sunday Business Post.

The Minister for Finance said he “fundamentally disagreed” with any attempts by insurers to reject business interruption claims on the basis that Government advice for businesses to close did not amount to an order to do so.

Failure “to do the right thing” could cause irreversible damage to the reputation of insurers, Mr Donohoe said.

The warning was one of several Mr Donohoe issued in correspondence and virtual meetings with the body, details of which were released to the Business Post under freedom of information legislation.

The Minister also warned that the actions of insurers during the public health crisis could have an influence on Government policy in the sector going forward. In a letter at the end of March, Mr Donohoe said he wanted insurers to “urgently rethink” their stance on business interruption policies. He said there was a “perception among the public” and businesses that insurers were “not acting honestly or fairly in the best interests of their customers”.

Half of firms fear closure as calls for €3bn scheme mount

Almost half of Irish businesses believe that they will be out of business within six months if the current situation continues, according to a new survey, the Sunday Independent reports. The survey comes as pressure mounts on the Government to provide a grant scheme to adequately support the liquidity of the more than 250,000 small and medium enterprises in the country.

Representative body ISME, which carried out the survey over the past week, has asked the Government to provide an average grant of about €20,000 to every Irish SME – a rescue programme that would cost the exchequer well over €3 billion.

Breccia, a company linked to businessman Larry Goodman, is understood to be seeking legal costs of up to €5 million following its marathon High Court litigation with Dr Joseph Sheehan, a co-founder of Dublin’s Blackrock Clinic, a report in the Sunday Independent says.

The case, initiated in 2014, concerned the ultimate control of the clinic. Goodman secured majority control of Blackrock Clinic earlier this year after acquiring Dr Sheehan’s 28 per cent stake from a receiver.

Last week, Mr Justice Michael Quinn dismissed several claims made by Dr Sheehan. They included that Breccia had conspired with another clinic co-founder, Dr George Duffy, and others to damage Dr Sheehan’s interests regarding his acquisition of loans made to buy shares in the clinic.