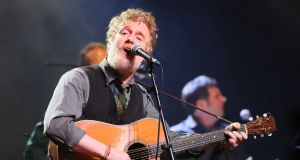 Glen Hansard: Covid-19 has halted much of his earning power. Photograph: Mark Stedman

Accumulated profits at the entertainment firm owned by Oscar winner and former busker, Glen Hansard last year increased by more than €90,000 to €1.3 million.

Accounts filed by Hansard’s Plateau Records Ltd show the artist – who left school at the age of 13 to go busking on Dublin’s Grafton Street – had a lucrative year as he shared pay of €261,000.

Last year, the Dubliner completed a string of US dates followed by a European tour. However, like so many in the entertainment industry, Covid-19 has halted much of Hansard’s earning power with no live concert performances since March.According to the singer songwriter’s website, Hansard is due to join old colleagues in The Frames for a number of dates in the US in September.

The northsider first shot to prominence with The Frames over 25 years ago and the accounts show that the firm’s directors’ remuneration last year decreased from €307,700 to €285,000.

Hansard serves on the board with Claire Leadbitter.

A Ballymun native, Hansard achieved worldwide fame in 2008 when he and then girlfriend, Marketa Orgliva, won an Oscar for the hit Falling Slowly from the film Once.

1 Should I switch bank now with Ulster Bank at risk of closing?
2 Air travel never going ‘back to way it was’
3 Household wealth jumps by 74% since last recession – report
4 Will brother’s widow get half of our parents’ estate when they die?
5 Tourism and aviation players demand von der Leyen end EU travel chaos
6 Pallet manufacturer looks to imports as timber crisis takes root
7 House insurance: save yourself money by reviewing your policy
8 ‘Tax war’ will hit Ireland if digital tax talks fail, OECD says
9 ‘I have three children and a dog, so I feel like a bit of a human ATM’
10 Finance Ireland refinances mortgages with low level of payment breaks
Real news has value SUBSCRIBE