‘Moment of thanks’ from magazines a harbinger of industry pain

Laura Slattery: Consumer titles have innovated, but a crisis lurks 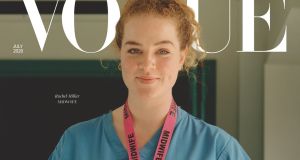 Rachel Millar, a 24-year-old midwife from Coagh, near Cookstown, Co Tyrone, was one of three women chosen to front the latest edition of Vogue

It’s a sign of the painful times endured by consumer magazines that it has taken abrupt changes of tone and focus for eyebrows to approvingly raise in the direction of their forlorn shelves.

Without question, the best thing they have done since the advent of coronavirus is to respond to and amplify the explosion of sentiment for ordinary unsung heroes, and not on page 78 as some tokenistic afterthought to the standard recipe of celebrity and consumerism, but through admiring cover features. They have been striking for their very novelty.

To date, it is the UK edition of Vogue that has attracted the most attention on this score by putting three essential workers on three separate July covers – midwife Rachel Millar, from Co Tyrone, train driver Narguis Horsford and Waitrose employee Anisa Omar. “It’s not really every day you see your face plastered over the news and social media,” as Millar said to The Irish Times after.

The Bauer Media weekly title Grazia arguably got there first at the end of March when its four covers – “shot in a matter of minutes” in hospital car parks – featured four women from the healthcare front line, only one of whom, the Labour politician Dr Rosena Allin-Khan, had any prior claim to fame. But Vogue’s version was the more eye-catching, in part because in normal times it offers much less of a “real woman” vibe than Grazia.

As Vogue UK editor-in-chief Edward Enninful put it, “here at Vogue we are, perhaps, not most famous for chronicling the minutiae of everyday life”. Prosaic realities like public transport and supermarkets are not its mainstay, he might well have added. But in a publication that “proudly waves the flag for fashion”, it was, he wrote, time for “a moment of thanks”.

Over at digital-led Glamour US, where there has been no print edition to distribute to abandoned physical news stalls and racks, its most recent digital cover is an illustration of a city landscape in which each of the windows links to reader submissions on the theme of Love in the Time of Corona. This marks two firsts for the magazine in one, says its editor-in-chief, Irish woman Samantha Barry. “It really blew up,” she says of the call for readers’ stories.

Vogue, Glamour and Vanity Fair are all part of a Condé Nast empire that has been far from immune from layoff threats, pay cuts and fears of portfolio shrinking

The last pre-coronavirus Glamour cover shoot, featuring the then heavily pregnant US footballer Alex Morgan running on a beach and kicking a ball thrown by an offscreen Barry, was for an interview that had to be swiftly redone after the crisis took hold. Instead of the piece being about Morgan’s plan to recover from giving birth in time for Tokyo 2020, it became the story of what it felt like to be pregnant in the middle of a pandemic and how she felt about the Olympics being postponed.

Vanity Fair, meanwhile, isn’t exactly known for its sense of humour, but by sending a pandemic-safe drone over the backyard of Schitt’s Creek actor Catherine O’Hara for its June issue, the magazine created pictures worthy of her joy-giving comedy talents and made a virtue of social distancing in the process.

The photographs by Art Streiber and his team of four (a small crew, by US standards) glow like a parody of those the-rich-are-just-like-us images often advanced by the glossies, with the multi-wigged O’Hara channelling her absurd diva character Moira as she poses for garden activities in a state of consummate overdress. Underlining the crisis-innovation feel, the cover of the same issue features singer-actor Janelle Monae modishly photographed down a Zoom connection.

Like other forms of media, consumer magazines have had to adapt to a new logistics of production, while also wondering what the changed world means for their titles. In a business with long lead times and fiendish levels of advance planning compared to their newspaper cousins, print magazines are having to deal with a pandemic that has dulled luxury advertisers’ marketing budgets, destroyed print circulation at least temporarily and threatened to turn some of the suddenly underemployed A-listers who usually grace their covers into irrelevances overnight.

Consumer magazines will, of course, continue to suggest that their priorities chime with ours

Scouring hospital car parks, rewriting articles and activating drones to cope with the year’s new look are unlikely to be the most challenging workloads facing consumer magazines in 2020. Vogue, Glamour and Vanity Fair are all part of a Condé Nast empire that has been far from immune from layoff threats, pay cuts and fears of portfolio shrinking, and if Condé Nast is suffering, you can bet other every magazine company is hurting just as much.

As economic restrictions ease, magazines groups, like their advertisers, will be banking on the sort of enthusiastic return to consumption that has been dubbed “revenge shopping” in China. Failing that, they will bask in newsy hooks – the perfect home office, the best lockdown loungewear, the prettiest and most exclusive face masks – that seem alive to the fact that something fundamental has changed, yet are still vaguely aspirational.

The celebrities who were thriving before coronavirus may not simply reclaim their place on the front covers. By rights, genuine lockdown stars from Trump lip-syncing comedian Sarah Cooper and Normal People actor Paul Mescal will be in, while spoofers who revealed themselves as entitled and cavalier during the crisis will be out.

Consumer magazines will, of course, continue to suggest that their priorities chime with ours. And yet only someone drained of all cynicism would predict that the moment of thanks for the under-acknowledged people we depend upon in an emergency will be anything more than a moment.