Is President Higgins right to downgrade the rating agencies? 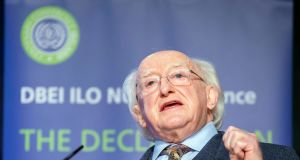 President Michael D Higgins gave a bit of a kicking to rating agencies on Wednesday during a question-and-answer session in the wake of a lengthy online address he gave to the Institute of International and European Affairs.

His talk was on the topic of the European Union’s relationship with Africa but he placed the topic in the context of what he said was great change in the global order and a requirement for a new type of economics.

He had, he said, been speaking recently with Carolos Quesada, president of Costa Rica, where a lot of good work was being done in relation to the balance between economics and ecology.

However, the Central American country is currently suffering from the effects of coronavirus, blows to tourism and other problems.

“Here is a totally unaccountable, dangerous set of possibilities,” he then said. “The role of the rating agencies, Standard & Poor’s, Fitch, Moody’s, and the rest of them. Downgrading a country just at the very time when it is trying to come out of vulnerability.

“It is essential that the rating agencies go off the table while we are responding to Covid and, indeed, with a bad record, they are not very valuable to anything we have been speaking about.”

They said the changes in their assessements took into account the country’s higher-than-peers wealth levels, its dynamic economy and comparatively strong institutional governance indicators.

President Higgins described the Central America state as a “wonderful country” but ratings agencies can be cold-eyed in their assessments of sovereign states and their finances.