‘Plenty more to come from here... none of it news’

Who were ‘besties’ again? Which broadcaster had ‘manflu’? And was any of it news? 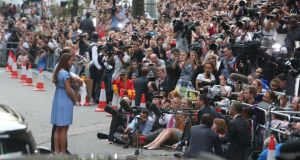 The Duke and Duchess of Cambridge introduce son George to the world’s media in July. photograph: steve parsons

"I defy anyone to point to a broadcaster who can do a 20-minute interview on a complex subject as well as Pat Kenny."

"When RTÉ sneezes, we all get pneumonia. And it seems when RTÉ gets a cold, it acts like it has man flu."

"We had that hiccup last year with the photographs. We’re through that, and we’re all mates again... We’re besties."

Independent News & Media chief executive Vincent Crowley says there are no hard feelings between INM and Richard Desmond a year after the British media magnate threatened to close the Irish Daily Star. (August)

"I didn’t buy them myself, because for a start I’d be mortified. Imagine going into a post office and asking for sheets of stamps with myself on them."

Former newsreader Anne Doyle laughs about one of the more odd manifestations of fame: appearing (in 2011) on a special line of RTÉ-themed stamps. (November)

"They have the town so decorated with posters, it’s looking like Pyongyang."

"We’re losing our jobs. We journalists always knew we’d lose our jobs. We knew it in the way smokers know that sucking a little stick of tobacco gives you cancer. We knew it, but when it happens, it’s still a shock."

"The women we feature in the magazine are ornamental. I could lie to you if you want and say we are interested in their brains as well. We are not. They are objectified."

Esquire editor Alex Bilmes makes the case for honesty as he admits his magazine uses images of women “in the same way we provide pictures of cool cars”. (March)

"Plenty more to come from here of course, none of it news... But that won’t stop us. We’ll see you later."

BBC News presenter par excellence Simon McCoy reports from outside the Lindo Wing of St Mary’s Hospital, London, as the world’s press waits for Kate Middleton to give birth. (July)