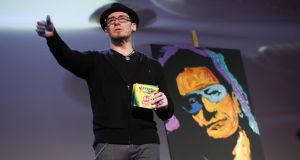 US speed painter and graffiti artist Erik Wahl with his portrait of U2 singer Bono at the Pendulum Summit at Convention Centre Dublin. Photograph: Conor McCabe

There is usually a Bono angle to stories about major gatherings in Ireland, and the Pendulum Summit is no different. This one says much about how business issues have hopped the fence from cultural obscurity to mainstream entertainment.

Pendulum, a chicken soup for the business soul-style motivational jamboree at the Convention Centre Dublin (CCD), kicked off on Wednesday morning with a lively presentation by Erik Wahl, a US speed painter and graffiti artist who also preaches the power of creativity.

As the uplifting strains of U2’s Beautiful Day jolted the 3,000-strong crowd like a double espresso at dawn, Wahl quickly dashed off an impressive technicolour likeness of the band’s frontman on a large canvas onstage. He then launched into his slick sermon, exhorting the crowd to be artful in their business and personal lives.

Wahl then produced an envelope of Fear Factor instructions, aping the mock-sadistic dare game show, and entered the crowd in search of a volunteer. As most of the audience silently screamed don’t pick me! he settled on Bronagh, who looked a typical young executive. Late 20s, or maybe early 30s. Reliable.

Poor Bronagh wasn’t sure about this craic at all, at all. But gamely, she accepted Wahl’s challenge and headed for the stage, albeit with the trudging gait of a game show contestant who had just won a free root-canal operation.

This being a show about business and leadership and all that jazz, Wahl gave her the option of “delegating” her mysterious Fear Factor role to someone else. She took a deep breath, summoned her pluck and chose to persevere herself. Go Bronagh! Everybody was on her side.

How relieved she was when she opened the envelope to find that, instead of a horrific demand that she place her head in a fishbowl of tarantulas or go on a dinner date with Peter Casey, she was to receive the Bono portrait for her bravery.

You see, folks! His message was clear: Bronagh had banished her fear, taken a calculated risk and got the requisite reward. Copy her and you will succeed.

Bronagh bounced back to her seat, her face a picture of joy. The audience cheered. Wahl faced the crowd and held out his hands, like Moses on a beach about to part a sea of M&S suits and pencil skirts.

You see, folks! His message was clear: Bronagh had banished her fear, taken a calculated risk and got the requisite reward. Copy her and you will succeed.

The old risk-and-reward trope is standard business fare. Every poor sod with a commerce degree had to sit through hours of enterprise lectures on this sort of stuff: about how entrepreneurs and business leaders are irrepressible fonts of gumption, but that’s why they have all the money.

Yet this wasn’t some dusty lecture hall, or an Ibec seminar, or a Saturday afternoon of self-congratulation at the golf clubhouse. This was business as pure entertainment, in front of an enraptured crowd paying €800 a head for the privilege. This was showbusiness, in every sense. This is post-recovery Ireland.

The Californian Wahl didn’t look like a traditional business guru, with his black trilby hat, chinny beard and black hoodie-skinny jeans combo. With the paint on his hands, he looked like he could have just returned from spraying a Che Guevara mural on the gable end of Denis O’Brien’s house.

But in our modern, confident, digitally-remastered economic era, the likes of Wahl could be a worker from any company. He could be a procurement manager or account executive, or Erik from accounts, or even your boss on his day off.

Business in the digital age has changed to become less formal and more culturally attuned, and Ireland has pivoted with it. Perhaps it is the inevitable consequence of having Dublin as Silicon Valley’s European holiday home.

As the business beatnik Wahl preached to the masses at the CCD in the docklands, battalions of people just like him sold ads or engineered solutions to problems directly across the river in the offices of companies such as Google and Facebook, or at Ireland’s semi-indigenous me-too tech giant: Stripe.

Wahl’s motivational speech was followed by another from Leinster rugby coach Stuart Lancaster. Again, how fitting. As this State has marched the road to prosperity, with business events as cultural reference points and acceptable entertainment, rugby has marched every step of the way with it.

When the soccer crowd was in the ascendancy – Euro 88, Italia 90 and times such as that – the economy was in a heap. But nobody cared about business issues then anyway. It wasn’t cultural entertainment. It was for posh people.

If some enterprising former rugby star such as the Pendulum founder Frankie Sheahan had tried to launch a business motivational conference in the north inner city back then, he would have been scorned or even lynched, beaten to a pulp by lads armed with battered sausages and wearing green Opel jerseys.

The first time the State got wealthy, during the last boom, we lost our heads and ended up culturally venerating celebrity chefs. Then we lost all the money, and celebrity economists took over. We needed them to tell us how poor we had become, and what a subordinated bond was.

Some things never change, though. Whatever is happening, there will always be a nod thrown to Bono. He’ll be about the place forever.

That was the start of it. Then along came business television shows like Dragons’ Den (Seán Gallagher and Gavin Duffy were in the crowd at Pendulum) and The Apprentice, and business went mainstream and never looked back.

The economy is now chugging along nicely on digital oil money. Meanwhile, recent referendum votes show that Irish society has liberalised almost as much as our trade policies.

They seem like strange, almost counterintuitive bedfellows: Ireland’s social swing to the left, just as everybody becomes interested in the economy and business, and companies cotton on to culture and vice versa. But there you have it. That’s modern life, and we must live it and enjoy what we can.

Some things never change, though. Whatever is happening, there will always be a nod thrown to Bono. He’ll be about the place forever.

News reaches us of a special honouree at the Irish Tourism Industry Awards, which are due to take place in the Clayton hotel on Burlington Road in Dublin, on Friday February 1st.

The event, held every two years, is organised by the industry lobby group, the Irish Tourism Industry Confederation (Itic), as well as the sector’s State agencies – Fáilte Ireland and Tourism Ireland – and sponsors such as the Guinness Storehouse and Aer Lingus.

The word on the breeze is that Willie Walsh, the airline’s former chief executive who now runs its parent, the British Airways parent IAG (International Airlines Group), is set to receive a special recognition award.

Proper order, too. Few Irish corporate executives over the years have risen to the top of their field globally as Walsh has in aviation. He will be a popular recipient of the honorary gong. And he will surely have a few interesting things to say about Brexit on the night.

Meanwhile, the judging panel, which includes Glen Dimplex chief executive Fergal Naughton and Fleishman Hillard’s Rhona Blake, is busy sorting through the contenders for the awards, which honour excellence in categories such as best international marketing initiative and best innovative place to stay.

No word yet on the breeze about who will win those gongs. Good luck to all.

A pub with no beer?

How can a pub possibly capitalise on the craze that is dry January? Trevor O’Shea’s Bodytonic group has managed it at MVP, the hound- and hipster-friendly hostelry in Dublin near Harold’s Cross Bridge on the Grand Canal.

MVP is the venue for “Sober Sundays” all month long. It includes alternative-style themed around music, yoga and meditation, as well as non-alcoholic drinks such as kombucha.

If you can’t beat the temporary teetotallers, join them.