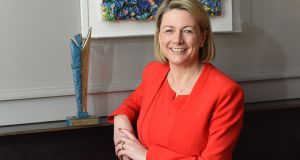 Fiona Dawson of food giant Mars, with the award recognising her as Ireland’s ‘ultimate marketer’ of the past 25 years.

Senior Mars executive Fiona Dawson has been named “Ireland’s ultimate marketer” of the past 25 years at the annual marketer of the year event in Dublin today.

The Irishwoman, who has been global president of Mars Foods, Drinks and Multisales since 2015, was recognised by her marketing industry peers at the ceremony hosted by trade publication Marketing.ie and sponsored by recruitment company Alternatives.

She described the award as “a considerable honour” and said it was also a recognition of the teams she had worked with present and past.

“Marketing matters at the highest echelons of the corporate structure where its influence has never been more keenly felt,” Ms Dawson said.

From Dublin, she is also a member of Mars Inc’s top leadership team, which oversees $35 billion (€30.7 billion) in sales.

She first joined Mars on a graduate trainee scheme, becoming brand manager for Snickers in 1990. When she was appointed general manager of Mars in Ireland in 1999, she was the company’s first ever female general manager.

She later became president of Mars Chocolate UK and Global Retail, during which time she introduced brand partnerships between Maltesers and charity Comic Relief and Galaxy and adult literacy project QuickReads, as well as the Just Play initiative with the UK’s Football Association, which was designed to help adults get back playing football.

She lives in Berkshire, England, while her office is in Brussels.

Michael Cullen of Marketing.ie said Ms Dawson had been named Ireland’s foremost marketer of the last 25 years to mark the silver anniversary of the event. “An inspiring and motivational leader, she has achieved outstanding brand and business success.”

Marketing.ie readers were invited to make nominations, which were then assessed by a judging panel chaired by Damien McLoughlin from the UCD Smurfit Graduate Business School.

In an interview with The Irish Times in 2015, the Mars executive described the culture of the privately held US-headquartered confectionery and pet food company.

“Mars doesn’t operate like a big ship,” she said. “It’s more of a flotilla and, without traditional shareholder pressures, we can take longer to do things or can take a stand if we feel strongly about something.”

She acknowledged the Mars family were perceived as secretive, but said that was not her experience.

“I think some of the ‘mystery’ is explained by the fact that the Mars family is phenomenally humble, very egalitarian and not at all interested in being in public view. But if you work for the company, they are very accessible. I could pick up the phone and speak to pretty much any of them at any time.”