Plenty of pizzazz as Pendulum prepares for star turn Boris 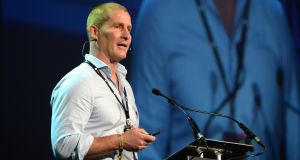 An artist, a rugby coach, an executive coach, a comedian, a cave diver, an evangelist with no limbs and a Hollywood heart-throb were all on hand to deliver leadership wisdom on Wednesday to delegates at day one of Frankie Sheahan’s motivational Pendulum Summit at the Convention Centre Dublin.

The business event, founded by the former Munster rugby star Mr Sheahan in 2014, will attract more than 6,000 attendees over its two days, with Tory arch Brexiteer, Boris Johnson, the big draw on Thursday’s roster of speakers.

Motivation doesn’t come cheap, at €800 for a standard two-day pass to the event. Ahead of Mr Johnson’s speech, a few last minute premium seats for the second day only were on sale for €945. The blue chip list of sponsors includes Volvo and Aer Lingus.

Wednesday’s opening presentation by Erik Wahl, a US speed painter-turned-speaker, brought an alternative feel to the morning, as he exhorted the Dublin crowd to explore their creativity to pursue “the art of leadership”.

His speech was followed by the Leinster rugby backroom coach, Stuart Lancaster, and then Marshall Goldsmith, a genial US veteran speaker and author of 41 books who describes himself as the top executive coach in the world.

“Don’t waste time trying to change things in other people that they don’t want to be changed,” Mr Goldsmith advised the crowd.

Ruby Wax, the US comedian and author, was also on hand to dispense her theories on mindfulness and positive mental health. Her presentation, “ How to be a Human”, underlined how Mr Sheahan has tweaked the first day of this year’s summit to make it as much about personal development as business issues.

Mr Warny explained how he first heard about the potential disaster on his Facebook feed: “On the Friday after work, I texted a rescue diver I knew was there to say good luck and shout if you need me. He immediately texted me back and asked how quickly I could be ready.”

Australian Nick Vujicic, who was born without arms and legs but now runs two companies, and actor Colin Farrell, who was interviewed about success onstage by RTÉ’s Miriam O’Callaghan, finished out the day.

It all felt like a warm-up, however, for what is clearly the main event: the Thursday speech by Mr Johnson, who is coming to Dublin to speak about “opportunity in uncertainty”. Brexit, it appears, should at least provide plenty of the latter.