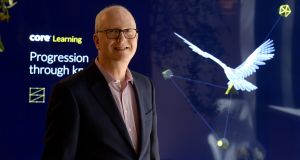 Marketing communications group Core made a net profit of €1.6 million in 2017, accounts filed at the Companies Office for Core 1WML Limited show. This was down 27 per cent from almost €2.2 million in 2016.

The group, which plans and purchases advertising from television, radio and print media and is engaged in digital activities, incurred exceptional expenses of about €671,000 last year, mostly relating to a loss on the disposal of a long-term leasehold property.

The company, which recently relocated most of its operations to the new 1 Windmill Lane office building in Dublin 2, employed an average of 277 people during 2017, up from 238 the year before. Its turnover – which relates to client billings – was €213.1 million in 2017, down from €222.1 million.

It invested about €520,000 in 2017 in development costs for a data analytics tool, the accounts also show. Data analytics is a fast-growing component of the marketing industry as agencies seek to gain an edge over their competitors and deliver more effective campaigns.

Core’s investment in its operations has continued in 2018, with the group putting some €7.5 million into a restructuring of the business.

French ad giant Publicis Groupe has a 16 per cent stake in the company, which is otherwise locally owned. It is led by chief executive Alan Cox.

Meanwhile, media services group Omnicom Media Group (Ireland) Limited made a net profit of about €1.19 million in 2017, down 4.3 per cent from €1.24 million the year before, as expenses climbed faster than revenue, its latest accounts show.

The company, which employs 87 people, recorded turnover of €81.3 million, up 4.9 per cent. It is jointly owned by Irish International Communications Group and Cawley Nea Limited, which are both owned by the US-headquartered ad giant Omnicom Group.

A third marketing communications company, Dentsu Aegis Network Ireland, made a loss of almost €1.2 million in 2017, compared to a profit of about €66,000 the year before, after staff and other costs rose. Its turnover was €108.1 million, similar to 2016’s figure.

No dividend was paid to the parent company, which had received €2.5 million from the Irish business the year before. Dentsu Aegis Network, which saw its chief executive Jerry Buhlmann step down on Wednesday, is a London-headquartered subsidiary of Japan’s Dentsu.

1 Revenue publishes list of companies tapping State for wage support
2 107 jobs at risk as Broderick’s shareholder considers examinership
3 Trump vs Biden: Stakes are high for the Irish economy
4 Bake-off soy sauce tweet backfires for UK trade ministry
5 NatWest CEO declines to give timeline for Ulster Bank decision
6 Stripe moves payment processing to Dublin due to Brexit
7 Over 60% of mortgage holders miss chance to save €10,000
8 Will remote working become the norm?
9 How long can Government afford to keep State pension age at 66?
10 Corporate America is breaking with Donald Trump
Real news has value SUBSCRIBE