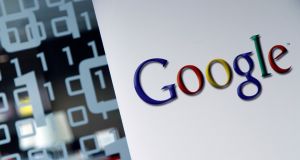 Google is to review pay and conditions at one of its Dublin operations after an investigation revealed it was using third parties to hire workers at low rates, according to the Sunday Times. Photograph: Virginia Mayo/AP

The Sunday Times leads with a story that Google has promised to review pay and working conditions at one of its Dublin operations. The move comes after an investigation revealed the internet giant is using third parties to hire workers at lower than the living wage of €11.70 an hour.

Elsewhere, it reports that US private equity fund Motive Partners is planning to open an office in Dublin after gaining €25 million in backing from the Ireland Strategic Investment Fund (ISIF).

The newspaper also reports Ireland’s second-largest stockbroker Goodbody is in talks with a Chinese investment firm over a possible €100 million buyout.

Meanwhile, the country’s largest stockbroker, Davy, is said to be eyeing a possible bid for IFG’s Saunderson House, according to both the Sunday Times and the Sunday Independent.

The latter publication also covers an attack by Enet chief David McCourt on Eir, in which he complains about the high cost of using the telco’s infrastructure.

Separately, the newspaper says that NTR has raised €66.5 million of debt for a number of wind farm projects.

The Sunday Business Post reports on a crackdown by Revenue on the self-employed that it says could net up to €60 million for the Exchequer.

It also reports that AIB is under fire for claiming that cheaper European business loans come with hidden fees.

The publication also covers Eir, with a number of rival firms lining up to say the telco is distorting the broadband market.

It also says that the Medici Living Group, the world’s largest co-living provider, and Roam, which has a string of properties around the globe, are among a number of companies looking at setting up co-living ventures in Ireland.

All the main Irish broadsheet Sunday newspapers cover Ammado, which was placed into liquidation last week as its boss Peter Conlon was held in custody Switzerland.

The Sunday Telegraph leads with news that Britain’s biggest housebuilder, Persimmon, is under pressure to oust chief executive Jeff Fairburn unless he gives up most of his £110 million pay package.

It also reports on possible “explosive testimony” from Carillion’s former chief finance officer Zafar Khan when he appears before MPs on Tuesday.