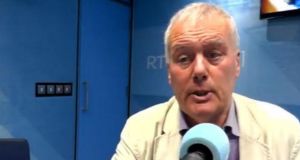 Morning Ireland’s description of Kevin Myers as a Holocaust denier misrepresented his views and lacked fairness, the Broadcasting Authority of Ireland has ruled. The authority is therefore upholding a complaint made against the RTÉ show, the country’s most listened-to radio programme, after its presenter Audrey Carville said on July 31st, 2017, that the journalist had “previously written a column in which he denied the Holocaust”.

Mr Myers had been dismissed by the Sunday Times, whose Ireland edition he wrote for, the previous day, after the appearance of a column whose remarks about equal pay at the BBC and the high-profile British broadcasters Claudia Winkleman and Vanessa Feltz, who are Jewish, prompted sharp criticism.

It is understood that the BAI’s ruling, which has yet to be published, will be read out on air in the coming days. The authority said it noted that Mr Myers had described himself as a “Holocaust denier” in a “typically provocative newspaper article” he wrote for the Irish Independent in 2009. But it added that it was evident from the article as a whole that his description did not amount to a statement denying the genocide of the Jewish people at the hands of the Nazi regime.

“Rather, the article was a comment on how language is used and the criminalisation of individuals or groups who engage in Holocaust denial,” the BAI’s compliance committee said. “In this context, the comments by [Ms Carville] were considered to lack fairness to Mr Myers and . . . misrepresented his views in a manner which would likely mislead audiences as to his views.”

The complaint came from a listener, Karl Martin, who said the presenter’s description “was an absurd claim based on a newspaper article written by Mr Myers over eight years ago under a misleading headline that he didn’t write . . . It is quite clear from the article that Myers believes that there was a Nazi genocide of the Jews – he typically and pedantically takes issue with the word.”

RTÉ told the BAI that “these are Mr Myers’s own words”. The national broadcaster said Ms Carville’s statement that the journalist had “previously written a column in which he denied the Holocaust” was accurate and fair, did not misrepresent him and in no way misled listeners. “The broadcaster maintains that if [Mr Myers] is being referred to around the world as a Holocaust denier, it is because he described himself as such,” the BAI’s report says.

Mr Myers told The Irish Times last week: “I’ve been much buoyed by the support of ordinary people . . . Obviously the media treated me disgracefully . . . They repeated lies and they repeated falsehoods about me, and a vilification of me that was unjustified and unparalleled in the history of Irish journalism. I’ve never known anything like it.”