Irish boards are like a box of chocolates: full of surprises 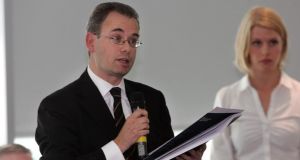 When considering the independence of directors at listed companies, it pays to remember the Forrest Gump theory of corporate governance: an Irish board is like a box of chocolates. You never know what you’re going to get.

Take the impending appointment to the board of Independent News & Media (INM) of John Bateson. It highlights yet again the bewildering inconsistency in the application by certain Irish companies of the corporate governance codes, which say half of a board should comprise independent directors.

Bateson has spent almost his entire 30-year career as a qualified accountant working for Dermot Desmond. As the managing director of International Investment & Underwriting, he is Desmond’s corporate viceroy, his representative on Earth.

Whenever Desmond has something to say at a company AGM, it invariably flows from the mouth of Bateson. They are inextricably linked.

Bateson is due to join INM’s board on March 1st. Desmond is a 15 per cent shareholder at the newspaper publisher and Bateson is his nominee.

His previous nominee, David Harrison, chief executive of Desmond’s Intuition Publishing, walked off the board three days before Christmas. This was at the height of the governance circus around outgoing chairman, Leslie Buckley, who is at the centre of an investigation by the State’s corporate watchdog.

Prior to his exit, Harrison was deemed by INM’s board – under the corporate governance codes to which listed companies must adhere – to be a non-independent director because of his links to Desmond.

INM has since confirmed that Bateson similarly will be deemed to be non-independent, due to his even closer links to Desmond. It makes sense.

Bateson is also the financier’s nominee to the board of a different Irish listed company, travel software company Datalex. Desmond owns about 27 per cent of Datalex and is by far its most powerful shareholder. Yet, despite his links to Desmond, Bateson is considered to be independent by the Datalex board.

The software company acknowledges in its annual report that “some shareholders might question” Bateson’s independence: “The board is satisfied that [he] continues to demonstrate independence in the execution of [his] role and [his] contribution to the overall performance of the board.”

So how do you square that with his designation of non-independence at INM? Two different companies. One director (Bateson) with links to the same shareholder (Desmond). Two diametrically opposed outcomes over his designation.

INM’s head office is on Talbot Street. Bateson could, theoretically, attend a board meeting there one morning at which he would be considered non-independent because of his links to Desmond, a major shareholder.

If it were a nice day, he might then take a leisurely stroll up the road for a board meeting at the East Point headquarters of Datalex. There, he would be considered independent, despite having exactly the same links to the same investor.

Can somebody please explain how this apparent transformation of Bateson’s independence could take place on his 30-minute walk across the Royal Canal?

Following INM’s proposed board overhaul on March 1st, the company says it will announce a new chairman to replace Buckley. This will be another test of how seriously investors take governance codes, which specifically state that a chairman should be independent upon appointment.

Buckley was nominated to the INM board by Denis O’Brien, his closest associate with whom he has co-invested in scores of companies. They’re closer to each other than Bateson is to Desmond.

Buckley is no more independent of O’Brien than Zig is of Zag. Yet nobody kicked up when he was appointed INM chairman for the second time in 2012. Buckley’s non-independence was acknowledged by the company. But, under the codes, his appointment was deemed justified by INM on the basis of his experience – comply or explain.

When Buckley’s impending exit from INM was announced two weeks ago, the company’s flagship title, the Irish Independent, immediately reported on its website that he would be replaced “on an interim basis” by Paul Connolly, another long-time O’Brien ally and his board nominee.

Such an appointment would appear, yet again, to fly in the face of the appointment guidelines for chairpersons that are outlined in the codes.

About 30 minutes after it appeared online, the Irish Independent report was amended to delete the reference to Connolly. The official position is that Buckley remains in place until March 1st, when his replacement will be announced.

Perhaps the company has a surprise appointment up its sleeve.

But if the initial rumours – and its own flagship title’s original reporting – are correct, and Connolly is appointed the new chairman, INM will have to explain how this sits with the new dawn in corporate governance standards that should have been heralded by a board overhaul sparked by Buckley’s exit.

As Forrest Gump recalled, his mother always told him: “You’ve got to put the past behind you before you can move on.”

Law firm Arthur Cox is the subject of court proceedings in the US, connected with the 2016 bankruptcy of American Apparel, the clothing brand originally founded by Dov Charney, who was earlier forced out of the company in a haze of sexual harassment allegations.

The American Apparel brand lives on in a new company, which is unrelated to this case. But lawyers for the the wind-down vehicle of its previous incarnation are trying to claw back close to $50,000 from Arthur Cox.

The wind-down vehicle alleges that Arthur Cox, which provided legal services to the old American Apparel, was paid for services in the 90 days leading up to the bankruptcy petition. There is no allegation of wrongdoing but, under US rules, that cash can potentially be clawed back for the benefit of all creditors.

Still, that could be February’s caviar budget gone, up at Earlsfort Terrace.

Aymes International, a British company that produces oral nutrition supplements for malnourished medical patients, is limbering up for another battle with its old Irish competitive foe, Nualtra. This time, it will be a commercial fight, however, and not a legal one.

Nualtra, which operates in the same sector and whose investors include Leslie Buckley and Seán Corkery, chief executive of Denis O’Brien’s Actavo, was previously embroiled in a bitter series of legal actions against Aymes.

Those legal actions included allegations of trademark infringement against Nualtra in Ireland by Aymes and a related company.

The Irish company separately accused Aymes founder Roger Wertheim-Aymes of sending “poison pen” letters to damage it in the UK.

All seven sets of proceedings between the two sides were settled last year. Now, Aymes is planning to enter the Irish market, where its products will be in direct competition with those of Nualtra.

It is in talks with potential distributors here, and hopes to get its products listed on the State’s medical reimbursement schemes.

1 How well paid do you think you are? Here’s how to work it out
2 Life as a Facebook moderator: ‘People are awful. This is what my job has taught me’
3 Bank leaked my loan request to family who tried to rip me off
4 Suspicions rife as key Brexit trade talks begin in Brussels
5 Digicel plots network-sharing deal amid ‘tight’ cash levels
6 Irish companies restrict travel over coronavirus fears
7 Corona beer firm reeling after 8% slide due to coronavirus
8 Flight attendant seeks High Court injunction against Aer Lingus
9 Has CRH done enough to silence pesky Swedish activists?
10 Why Irish banks are now looking beyond vulture funds on problem loans
Real news has value SUBSCRIBE