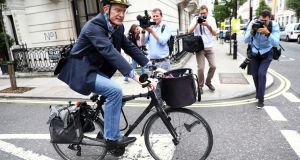 BBC presenter Jeremy Vine pictured leaving Broadcasting House. He is one of a group of senior male employees to take a pay cut.

Some of the highest paid male BBC journalists have agreed to pay cuts, the broadcaster said on Friday*, following revelations that its top male news reporters and presenters were earning significantly more than women doing similar jobs.

Radio broadcasters Jeremy Vine and John Humphrys and news anchor Huw Edwards are among those to have agreed either formally or in principle to salary cuts, the BBC said on its website.

North America editor Jon Sopel was also said on Friday morning to have agreed to a pay cut. The BBC later updated its own story to say he was “believed to be in discussions with the corporation on the issue”, and then subsequently confirmed in a further update that had accepted a reduced wage.

The updated story quoted radio presenter Nicky Campbell, who told listeners that he had taken a cut. Former political editor Nick Robinson, who co-presents Radio 4’s Today programme, was also added to the group, taking the number of men confirmed to have agreed to a pay cut to six.

Funded by a licence fee levied on television viewers, the BBC is closely scrutinised and held to exacting standards by the public and rival media. Pay disclosures made last July, which it had resisted, highlighted a broader debate about gender inequality.

Director-general Tony Hall pledged to close the gender pay gap by 2020, but the organisation has been criticised by its own journalists and by lawmakers for not acting fast enough.

Its China editor Carrie Gracie, who was paid significantly less than her male counterparts, resigned her role last month to fight against what she called the “secretive and illegal BBC pay culture”.

The BBC said the level of the cuts was not yet known.

Campbell earned between £400,000 and £449,999 before agreeing to a cut. His co-presenter on the 5 Live breakfast show, Rachel Burden, was not on the list of disclosed salaries as it only included the salaries of BBC presenters who were paid more than £150,000.

Burden later volunteered that she earned £130,000 for her role and said female journalists at the BBC had been “ignored or belittled” when they asked senior managers whether they were paid the same as comparable male colleagues.

Tony Hall and Carrie Gracie will be questioned about BBC pay by a committee of lawmakers on Wednesday.

*This story has been amended to reflect BBC News’s updates to its story.