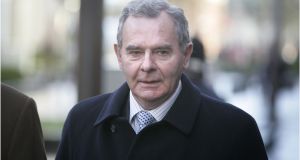 The Sunday Times reported that an Indian office linked to the family of businessman Sean Quinn took in $37 million (€30 million) in income between 2011 and 2017, but had just $88,000 when a local insolvency officer took over last year.

The newspaper quotes an affidavit opened in the Republic’s Commercial Court last week, where Kieran Wallace, special liquidator of the Irish Bank Resolution Corporation (IBRC), said that he had established that more than $15 million was moved out of Mach Soft Tech, which controls the Q City office complex in Hyderabad, through “sham transactions”.

Q City was part of the Quinns’ property business. Mr Wallace secured injunctions in favour of IBRC in 2012 blocking any interference with the building, which is valued at $80 million.

The newspaper reported that in his affidavit, Mr Wallace said that new evidence had emerged of “bogus transactions” between Mach Soft Tech and companies in Hong Kong and Dubai.

The Sunday Business Post reported that Ires,which owns and lets more than 2,500 apartments, has told the Minister that its investors struggle “to understand why the Irish planning system continues to frustrate and impede rapid delivery of residential developments”.

In a letter sent to Mr Murphy, Ires said that lowering building standards for apartments would in many cases make the difference between a project being viable or otherwise. A note from its chief executive, David Ehrlich, showed that relaxed rules could save up to €70,000 on the cost of each new home.

The newspaper added that this would save €32 million on the cost of Rockbrook, Ires’s 465-apartment complex in Sandyford, south Dublin that has been stuck in planning for almost two years.

Food group Aryzta could take a €500 million hit on the proposed sale of non-core assets, the Sunday Independent reported. In a profit warning last week, Aryzta said the sale of these assets would generate more than €450 million by July.

The newspaper calculated that the company spent €1 billion buying the same businesses, which include La Rousse, that has already been sold for €30 million; a 49 per cent stake in French company, Picard; and its US plant Cloverhill.

The Sunday Independent pointed out that Aryzta paid almost €450 million for the Picard stake and €530 million for Cloverhill. The company wrote down the value of the plant significantly last September, the newspaper noted.