Ireland’s Got Talent: will it be a winning formula for TV3?

It has puppeteers, aerial artists and a man playing the spoons - but will anybody watch? 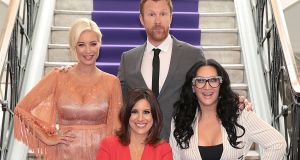 Saturday marks the debut of an eye-catching investment by TV3 - one that has a proven format, a mostly familiar line-up, some heartfelt singing and the power to make grown men and women cry.

No, not the Six Nations, but Ireland’s Got Talent.

He would say that, wouldn’t he? But Ireland’s Got Talent certainly has a lot going for it, from its super-scheduling to its strong cast of judges to its potential to get the audience talking. So what’s it all about and why does TV3 need it to be a hit?

Ireland’s got what now?

Ireland’s Got Talent is the new TV3-commissioned version of the Got Talent franchise, which began as America’s Got Talent and then Britain’s Got Talent and was devised by Simon Cowell (of X Factor fame) as a broad talent contest, with no act too dubious, no surprise-packages too contrived. Singers, dancers, comedians, jugglers, magicians, mime artists and dogs are all welcome.

The best-known contestant to date is probably singer Susan Boyle, who was the runner-up to dance troupe Diversity in 2009, but went on to set a new UK record for the fastest-selling debut album.

The format - which in the Irish version comprises seven pre-recorded audition shows and then a whole week of live finals - is sold internationally by Fremantle Media, part of European entertainment company RTL Group. RTL is in turn majority owned by German-headquartered media giant Bertelsmann.

Buying the format won’t have come cheap for TV3.

Why is this a good time to launch the show?

This weekend is “Super Saturday” for the Virgin Media-owned TV3. Ireland’s Got Talent is not, to be fair, the biggest draw of the day - that would be the rugby. This is the first year of TV3’s four-year deal to show the Six Nations and its coverage gets underway with Wales v Scotland (kick-off 2.15pm) followed by France v Ireland (kick-off 4.45pm).

TV3 will be hoping that the rugby has a “halo effect” on the rest of the schedule, with Ireland’s Got Talent at 7.30pm and spin-off show Ireland’s Got Mór Talent at 9pm getting a nice inheritance of viewers from all the sport.

If Ireland’s Got Talent was on RTÉ One, it would be expected to clear at least 500,000 viewers. But as quite a lot of people have mysteriously been unable to find TV3 on their remote in its 20-year existence, its target viewership is likely to be far more modest.

What kind of circus can viewers expect?

A glitzy one, with production values that are no noticeably lower than its British cousin. Series producer Shane Byrne, who has worked on similar “shiny floor” shows in Britain, says he was “quite reluctant” to do Ireland’s Got Talent at first, because “the Irish versions never look as good”. His fears were assuaged by TV3 and the production companies behind the show, Kite Entertainment (which makes Gogglebox Ireland) and Belfast-based Green Inc.

The four judges gel. Louis Walsh is the weary veteran of the Cowellite television era, while comedian Jason Byrne is there to undercut the more mawkish moments with his Dubliner brand of humour.

But it’s the women who steal the show: Denise Van Outen and American personality Michelle Visage are by turn astute, maternal and harsh-but-fair, while presenter and backstage-confidante Lucy Kennedy has got the requisite warmth and wit.

Isn’t there already enough of this stuff on TV?

Yes, no, maybe. Malone’s first big commission since leaving RTÉ in 2016 creates a weekend duopoly of entertainment shows aimed at everyone from kids to grandparents. So while TV3 is making its claim for Saturday nights with Ireland’s Got Talent, RTÉ One is half-way through the second series of Dancing with the Stars, a format based on the BBC’s Strictly Come Dancing, on Sunday nights.

But Dancing with the Stars is a celebrity format. Its arrival on RTÉ broke a Sunday night tradition of “civilian” talent contests that had dated back 15 years to You’re A Star and included the All Ireland Talent Show and another format import, the Voice of Ireland. This left a vacancy for a show that scoured Ireland on a mission to discover new talent (or, alternatively, give everyone a much-needed laugh).

It is still a valid point that neither show is, by definition, original. Some viewers, coerced to watch by loved ones, will be yawning in the aisles. But, hey, not everyone likes the rugby either.

So does Ireland have any talent?

Judging from the first episode, yes, but this is television, so the talent levels are not totally the point. The showcased acts, which stretch from “Voguers” to puppeteers to aerial artists to a man playing the spoons, may sometimes be one-trick or worthy of the “red buzzer”, but they are consistently mind-boggling.

Any doubts that the end-of-pier-style “turns” that characterise Britain’s Got Talent wouldn’t transfer well to the Irish version are laid to rest by the second ad break. And unless you are or have grown completely immune to television artifice, the first episode will pull on the heartstrings - assuming you have heartstrings left to be pulled.

Once the series reaches the live finals stage, public opinion comes into play, with the winner awarded their own TV special and, more importantly, €50,000. Please vote responsibly.