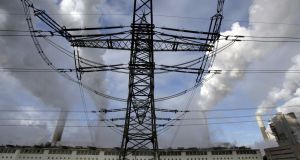 Eirgrid, SONI and the Commission for Regulation of Utilities are reorganising the electricity market at the behest of the EU. Photograph: Wolfgang von Brauchitsch/Bloomberg

All of SSE Airtricity’s power plants have qualified for new contracts from the Republic’s national grid in a shake-up of the electricity market.

From May these will be cut from about €55,000 for each megawatt (MW) of electricity that a plant can produce to €41,800, while Eirgrid and SONI cut back on the number of generating stations to which they will give the payments.

SSE confirmed that its 464MW Great Island plant in Co Wexford, two smaller facilities at Rhode in Co Offaly and Tawnaghmore Co Mayo, and the 590MW Tarbert plant in Co Clare qualified for the payments.

Contracts for the payments will run for 16 months from next May and will replace the capacity awards from which those plants now benefit.

Jim Smith, SSE’s managing director of generation, noted that the agreements gave the company clarity as it prepared for the introduction of the new Integrated Electricity Market (I-SEM) in May.

“Securing capacity contracts for our thermal generation units is positive news for our fleet, for our employees, and for SSE’s operations in Ireland,” Mr Smith said.

Eirgrid estimates that the new capacity payments will cut €200 million from consumers’ and businesses’ electricity bills every year.

Electricity users cover the cost of capacity payments through network charges on their bills.

However, power plants owned by the ESB and Viridian in the Republic and by AES in Northern Ireland did not receive contracts and face possible closure with the loss of more than 200 jobs in total as a result.

Payments were only offered to plants with the combined capacity to generate a total of 9,400MW of electricity. The industry as a whole can produce close to 11,000MW. The least efficient power stations lost out in the auction.

Eirgrid, SONI and the State’s Commission for Regulation of Utilities are reorganising the electricity market at the behest of the EU.

The Republic’s and Northern Ireland’s energy markets were integrated in 2007.