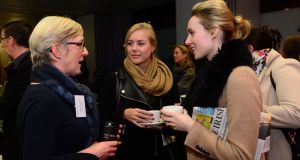 Aileen Donoghue of Virgin Media with Ottilie Higson and Caroline Keogh of Boy & Girl at the Marketer of the Year 2016 finalists breakfast, hosted by The Irish Times. Photograph: Dara Mac Dónaill

Revitalising the “stagnant” Aer Lingus brand, convincing young people to invest in health insurance during the downturn, and making Mr Tayto relevant to millennials were the challenges faced by finalists in this year’s Marketer of the Year 2016 award.

Some 150 people attended a Tuesday breakfast hosted by The Irish Times, where the three finalists of the competition, which is run by Marketing.ie, shared insights into their campaigns.

The competition was won earlier in November by Vhi Healthcare’s head of marketing, Adam Bacon. Criteria included the scale of the challenge faced, the strategy adopted, and the impact on the target market.

Addressing the crowd, Mr Bacon said the challenge facing his team related to convincing people to pay for insurance during the “economic meltdown”. The tactic he employed was to market the product through the personal stories of customers.

“Irish people navigate healthcare through personal stories,” he said. “If you ask me about St James’s Hospital, I won’t hit you with facts and stats. I’ll tell you how they treated my family in the last three years, because that’s how we do it here.

“We decided to rebuild our advertising platform around that insight. We invited our customers to talk about themselves and what our business meant in their lives. It was a testimonials campaign.”

The first thing Vhi did was to “soften the message” by using animation in the advertisements.

“We also played the long game,” Mr Bacon said. “Our first ad told the story of Margaret, who got Delhi belly. It was serious but not in any way threatening. Since then, we’ve gone up through the gears, from Crohn’s disease to cancer and heart surgery.”

The campaign, he said, led to increased reserves of more than €521 million for Vhi. “We’re a nonprofit organisation, but we’re absolutely in favour of returning a surplus every year, and we’ve done that for the last four years.”

In perception scores, he added, relevance went up 8 per cent, trustworthiness 11 per cent, and value for money 5 per cent.

For Dervila McGarry, marketing manager for Aer Lingus, the challenge was the airline’s “stagnant” brand, which “lacked innovation and modernity”.

“Ryanair really kept us on our toes and were continually very aggressive in the marketplace,” she said. “We were in the middle-market position while they were a low-cost carrier. When they decided to reinvest and focus on customer service, that move towards us in the middle meant we really needed to decide what to do.”

“Smart is the new buzzword of the modern age, and everyone likes to think they’re being savvy. So we felt the word would make people stop and consider Aer Lingus – particularly those international people who wouldn’t otherwise use the airline.”

The third finalist was Largo Foods marketing director Alina Uí Chaollaí, who was tasked with making Tayto crisps relevant to millennials. She instigated the “more than just a crisp campaign”, which went live in 2015.

“Back in 2010 there were some signs of decline,” she said. “While the baby boomers and generation Xers felt a real connection with the Tayto brand, it wasn’t quite ticking the box with millennials.

“People who had grown up with the brand no longer felt it was relevant to them. This is in the context of Pringles, Walkers, Doritos and all these global brands coming into the Irish marketplace and speaking to young people in a way Tayto hadn’t.”

Through speaking to consumers, the Largo team learned that Tayto was a brand millennials had “grown up with” and “was like a friend” to them. “This was a key insight that led to campaign,” said Ms Uí Chaollaí.

She said Largo delivered on its objectives and enjoyed a sales uplift of 10 per cent for the post-campaign period versus the previous year.

“Under-28s were up 30.9 per cent, which represented the single biggest increase of all age cohorts. “That showed we had done what we set out to do.”