Have you heard the one about the comedy sponsors?

Telecoms and beer brands want to bring on the funny, but what’s in it for them? 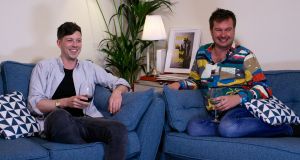 John and Dave from the very funny ‘Gogglebox Ireland’, one of the shows sponsored by Virgin Media Ireland.

Virgin Media Ireland would like to associate its brand with the sound of laughter.

To clarify, the telecoms group doesn’t want us to link its name to the weary cackle of people in the trenches of a bloody customer service battle. It wants us to attach it to the delighted splutter of people rendered helpless by comedy.

The company, a subsidiary of Virgin Media UK and ultimately owned by John Malone’s cable group Liberty Global, has signed up to sponsor comedy on RTÉ2 for a 12-week period, with its “pre-roll” stings introducing a new four-part show from bag-faced duo Rubberbandits, more episodes of Republic of Telly and the channel’s showings of sitcom The Big Bang Theory, the most-watched comedy on US television.

It is also paying up to sponsor 2fm’s Breakfast Republic, while last month it put its brand all over the funniest show on Irish television right now, TV3’s Gogglebox Ireland.

The RTÉ sponsorship focuses on Virgin’s newest product, Virgin Mobile, while on the Virgin-owned TV3, the stings highlight Virgin’s main broadband and television bundles, including the telly-addict feature of being able to record four shows while watching a fifth.

Virgin Media, the corporate successor to the more perfunctory, utility-like brand UPC Ireland, is now one year old in Ireland, which was to a large extent, ahem, virgin territory for the brand. The last big Virgin presence here was the Virgin music store chain, which has been gone for nine years.

The Virgin Media brand itself is licensed to Liberty Global by a separate company, Richard Branson’s Virgin Group. So on the one hand, Virgin Media can’t stray too far from existing UK iterations of the brand, and on the other, it has some freedom to create a new, entertainment-centric image for itself in this market.

Why pick on comedy? What is it about a genre that makes people forget their troubles in a haze of collective LOLs that attracts sponsors?

The question as framed answers itself. But it’s not quite as straightforward as saying comedy = feelgood factor, ergo some of that feelgood aura will rub off on the brand. Not all comedy is created equal, and not all comedy sponsors are the same.

Some, like Virgin, are both service providers and content companies. Rival Sky, for example, has in recent years sponsored the Cat Laughs comedy festival in Kilkenny and this year leveraged the deal, as the jargon goes, by producing a series of Irish-themed comedy shorts that could do three things: premiere at the festival, swell its range of on-demand extras and slot in nicely on the Sky Arts channel schedule.

Festival-friendly Vodafone, which as a mobile brand is a veteran of interacting with young people in their happy spaces, shells out for the Vodafone Comedy Festival in Dublin every summer, and next week lends its support to the Vodafone Comedy Carnival in Galway.

What these sponsorships do is remind us that telecoms brands are enablers of the basic pleasures of communication and shared culture. What they also do is help us forget that they are the source of groan-inducing bills.

Once, at a David O’Doherty gig in the frazzled run-up to Christmas, everyone in my party had either work or financial stresses, or had endured distinctly unfunny traffic in order to make it.

O’Doherty opened his set with the assuring declaration that everybody plonked on the venue’s fold-up chairs with pints by their feet was in the right place. We had bought the tickets, this was where we were meant to be. We could stop checking our phones for an hour.

It was the perfect way to disarm anyone with mixed feelings about how they had committed to spending their evening, or who, for whatever reason, might not have started out in the mood to laugh.

The other big category of comedy sponsor, alcohol, is feted in its own right for its ability to temporarily alleviate stress, and for many people, live comedy and alcohol are as inextricably linked as television and biscuits.

Foster’s, which in Europe is owned by Heineken, is all over comedy on Channel 4 and was a six-year sponsor of the Edinburgh Comedy Awards. The latter, originally “the Perrier”, is now the lastminute.com Edinburgh Comedy Awards, with the organisers hailing the travel site’s “spontaneous and inspiring” brand as the standard “great fit”.

The challenge for sponsors, particularly of live comedy, is that it can veer from beery, conservative groupthink to thought-provoking art, sometimes in a single sentence. The potential to cause offence, or just fall painfully flat, lurks.

Brands have a comfort zone and unlike seasoned comedy audiences, they won’t enjoy it being challenged. They will want a little bit of the “anarchic” on their side, just as long as they can predict it in advance. These are the risks involved with trying to differentiate a mobile brand from that of a bank.