VHI head of marketing is named Marketer of the Year 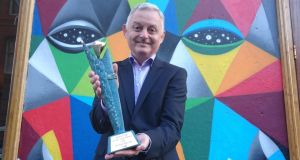 VHI head of marketing Adam Bacon oversaw the development of a new “brand world” for the health insurer.

VHI’s head of marketing Adam Bacon was named “Marketer of the Year” by trade publication Marketing.ie at a ceremony in Dublin on Wednesday.

Mr Bacon was one of three finalists for the award, alongside Aer Lingus head of marketing Dervila McGarry and Largo Foods marketing director Alina Uí Chaollaí.

The private medical insurance market was hit by the recession, leading to a surge in policy cancellations, while premiums have continued to climb. This meant VHI was “operating in a changed consumer and retail landscape”, one in which it was tasked with recovering the market share it lost between 2010 and 2013.

The company “leveraged” services such as the VHI SwiftCare clinics and VHI HomeCare in its marketing communications to distinguish itself from competitors.

Mr Bacon oversaw the development of a new VHI “brand world” in which members’ health insurance “testimonials” were brought to life in a series of animated television ads. Television remained “the bedrock of the communications strategy”, although its digital presence was also overhauled.

The judges agreed that the marketing strategy had helped VHI, which has an older member base than its rivals, win new business from a younger demographic.