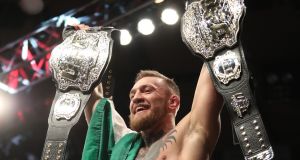 The Autorité des Marchés Financiers (AMF), the French financial regulator, banned 24Option, whose clients bet on movements in stocks and currencies, from recruiting new customers or maintaining relations with existing ones.

An AMF statement said that it found that Rodeler Ltd, trading as 24Option, failed to comply with obligations to provide relevant information and to act in an honest and fair manner in the best interests of its clients, “to the detriment of investors residing or based in France”.

The regulator imposed the ban in August under an EU directive allowing states to take appropriate measures to protect investors where a business acts in a manner that is “clearly harmful” to investors’ interests.

McGregor appears on 24Option’s website and will feature in the company’s promotional material. He recently told his 2.9 million followers on Twitter: “At 24Option it’s all about trading. But you can’t trade shots with McGregor.”

Multiple grand slam winning tennis player Boris Becker and Italian Serie A side Juventus also endorse 24Option. The company has a marketing branch in Dublin that manages these deals.

24Option offers binary trading, which allows clients to bet on short-term movements, up or down, in currencies, stocks, commodities and other assets. They lose money if the asset moves against their predictions.

Regulators are suspicious of such websites and there is a debate on whether binary trading should be treated as gambling or investing. In 2012, the US Commodity Futures Trading Commission took action against Irish-based binary options business, Intrade, ultimately forcing it into liquidation.

Earlier this year, the Cypriot financial watchdog CySEC fined Rodeler €156,000, following which the company agreed to update its procedures to ensure that it complied with the country’s regulations.