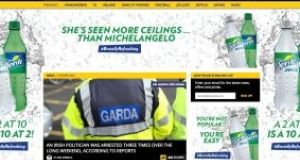 The complainants said the advertising was sexist, degrading to women, offensive and insulting, with several also adding that it was misogynistic

Complaints about a “sexist” online Sprite advertisement have been upheld by the Advertising Standards Authority of Ireland (ASAI) after its committee agreed that the advertising had caused grave offence.

The self-regulatory body received 10 complaints about Sprite’s “#BrutallyRefreshing” campaign, which used the lines “She’s seen more ceilings... than Michelangelo”, “You’re not popular... you’re easy” and “A 2 at 10 is a 10 at 2”.

The ads, aimed at young men, ran on Joe.ie and WaterfordWhispers.ie.

The complainants said the advertising by Sprite brand owner Coca-Cola Ireland was sexist, degrading to women, offensive and insulting, with several also adding that it was misogynistic.

The ASAI agreed that it had breached its code of standards, which states that advertisements must not cause grave offence. It also said the ad had been “exploitative of sexuality” and “used coarse and undesirable innuendo”.

After the advertisement attracted criticism on social media in August, Coca-Cola Ireland withdrew the ad and apologised for any offence caused.

Joe.ie had by that point already removed the ad, with editor Paddy McKenna stating that it did not reflect the Maximum Media-owned website’s “brand values” and should not have been there.

The ASAI said that because the advertisement had been withdrawn, no further action was required.

Advertisements are only found to be in breach of the ASAI’s rules on the grounds they are offensive if the offence they cause is deemed either grave or widespread.

A total of 11 advertisements were found to have been in breach of the ASAI code in its latest complaints bulletin.